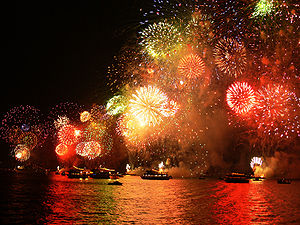 Travelling to Turkey on vacation? You may want to tie in your trip with a Turkish holiday or festival to get some insight into the Turkish culture.

The Mevlana festival takes place in the Turkish town of Konya in commemoration of Turkey’s great mystic poet Mevlana Jalaluddin Rumi. The festival happens in Turkey every year some time in mid December and usually lasts a few days.

New Year’s Day is a public holiday in Turkey and people usually spend the day visiting each other and exchanging gifts.

A village in Western Turkey called Selcuk plays host to the Turkish camel wrestling festival on the 15-16th January.

Spring Holidays and Festivals in Turkey

The 23rd April is a national holiday in Turkey because it is national sovereignty day which commemorates the establishment of the first national parliament in Turkey in 1920.Although only one day, the decorations and flags make it seem like a festival.

Turkey’s tulip festival is held in Istanbul towards the end of April. The beginning of May in Turkey sees the Ephesus festival of culture and art held in Selcuk near Izmir. The festival holds concerts, singing, dancing and craft displays.

The last week of May in Turkey sees the Festival of Pergamum held in a roman theatre north of Izmir. The festival provides drama and folk dancing.

Summer Holidays and Festivals in Turkey

There are many holidays and festivals in Turkey during the summer. The 4-5th June is the date of Turkey’s rose growing festival and competition held in Konya.

Turkey’s music and arts festival in Marmaris hosts many musical performers from all over Turkey.

Late June is the time of the country festivals of north eastern Turkey with folk dancing and bulls fighting.

Turkey’s water sports festival is held in Foca every year from 29-31st July with boat races and water skiing.

The ancient town of Troy is in modern Turkey and a festival to celebrate Troy happens from 15-18th August annually in Turkey with music and historic tours.

The biggest festival in Turkey is the Izmir international fair which starts around the 20th August and lasts for three weeks. There are amusement rides, exhibitions and commercial displays.

Autmun Holidays and Festivals in Turkey

The beginning of October in Turkey sees the annual Golden Orange film festival taking place in Antalya. This festival showcases the work of Turkey’s film makers and there is a competition for the best film in Turkey.