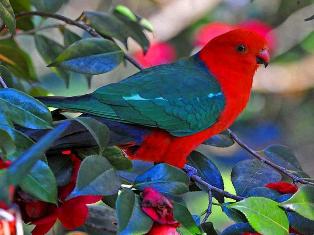 Want to know more about the famed Australian king parrot? Do you enjoy bird watching and are traveling to Australia too see the king parrots? Read our informative and factual guide…

Australian king parrots and indigenous birds native to the eastern parts of the country; these birds are found in humid and heavy forests regions that abound in the eastern areas of the continent including eucalyptus forests that provide an ideal habitat for the propagation of the species. They feed on the small insects, fruits and seeds found in the forestlands.

The species was discovered in 1818 by German naturalist, Martin Linchenstein. The size of both males and females of the species is the same with a long broad tail; however, there are variations in the color; males of the species sport a red breast head and on the lower underside of the body. It also has a blue band on the back of the neck while the back is green and the rump is blue. In males, the upper mandible has a black tip while the lower mandible has an orange base and yellow irises.

These markings are very different from those of a female that has green breast and head and a gray beak. The shoulder band is pale or completely absent, while the plumage of juvenile males and females of the species are almost the same with brown irises and a yellow beak.

The species is divided into two sub species; both are found in areas that range from North to the Central Queensland spanning to South Victoria. These birds are generally seen in small flocks with various species of rosella. They are also found in Canberra in winter and other areas such as the north shore of Sydney and the western suburbs of the city and the Carnarvon Gorge located in Central Queensland.

The birds are seen in the wild and are also bred in aviaries to be sold as pets. They have a calm temperament and are relatively quiet as house pets if raised by hand. These birds are native to Australia and have never been spotted outside the country. If you have one as a pet, you should know that they do not appreciate being handled frequently and have limited ability to talk. However, they readily bond with people and are very devoted pets. In the wild the life expectancy of the bird is unknown; however when kept as house pets; these birds can live for almost 25 years.

Their bright colors and quiet demeanor make them ideal pets; they can be kept in an indoor or outdoor cage and are easily available in several pet shops across the country.