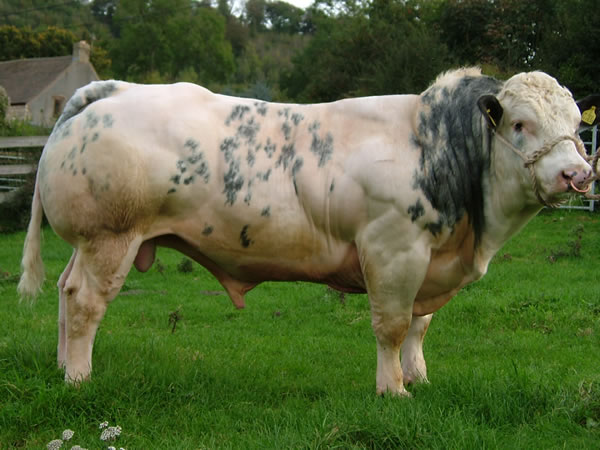 Interested in Belgian Blue Cattle? Find out about this big Blue giant native to the country of Belgium in our information guide.

The native cattle of Belgium, popularly known as the Belgian Blue cattle holds great prominence in the world of beef. This massive vegetarian with its high bone out exceptionally lean carcase is a very unique creature in terms of its looks and appears to be quite different from orthodox cattle.

The Belgian Blue cattle is not only used for its beef but it is also widely used in crossbreeding producing some outstanding results.

These unique cattle are known for possessing a high level of efficiency which makes it a superb performer. It yields a massive carcass of superior quality and has a very gentle and patient temperament despite its huge size. These marvelous qualities have encouraged Blue Cattle crossbreeding which has been taken up in various countries including Australia.

One of the things that set the Belgian Blue cattle apart are the ripping muscles found on its body. In terms of its high definition muscular body no other breed of cattle comes close to the Blue beast. Similarly when it comes to the carcass yield the Belgian Blue surpasses any other breed.

The unique appearance and the muscular physique has earned the Belgian Blue cattle world wide fame. The impressive muscle structure of the cattle has been termed as double muscling. Unlike other large cattle the Belgian Blue does not have a lot of fat deposits in its body. On the contrary the double muscling reduces the amount of fat in the body and increases the quantity of red meat.

It is impressive to see this huge beast move around in ease despite the heavy weight that it carries. They are structurally sound and have the ability to adapt to extreme climatic conditions. Today Belgian Blues are being bred in Mexico, Canada, Portugal, Argentina, Ireland, England, Australia and New Zealand.

The color spectrum of Belgian Blue cattle spreads from pure white to pure black and infinite shades of blue in between. Their rise to popularity has come about due to the high yield of red meat that they produce.

Origins and development of Blue Cattle

They originated from the heart of Belgium as well as the Northern regions. At one specific time the quantity of Belgian Blue cattle grew to such an extent that nearly half the number of cattle present in the country were of this breed. The breed was officially established in the 20th century and it was at this time that the authorities laid down a formal breeding policy. Under the policy Blue cattle were divided into two strains, one was used for the production of milk whereas the other for beef. Today however Belgian Blue cattle are only used for their beef.

The Belgian Blue cattle have come into their physical form as a result of selective genetic breeding conducted in Belgium. Professor Hanset of the AI Center is credited as being the man behind developing the breed that is today renowned for its unique looks as well as its massive yield of red meat.