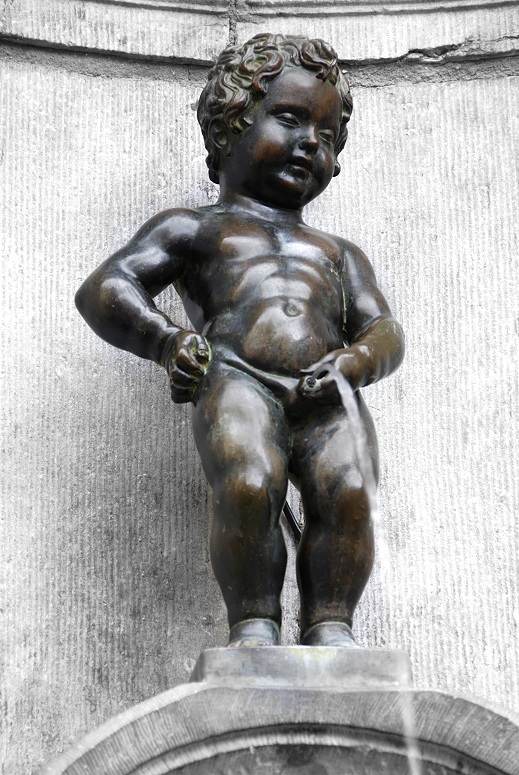 Interested in pond spitters Belgian boy? Find out about this unique landmark in the city of Brussels in Belgium.

The capital city of Belgium has one of the most unique landmarks in the world. The landmark is a bronze fountain sculpture of a little boy that can be seen urinating in a pond. This infamous landmark is known as the Manneken Pis which translates in English as the little pee man.

This unique statue is a recognized symbol of Belgium around the world. The Belgians dress up the little boy in various costumes according to the season. The wardrobe of the little pee man must now consist of over a hundred different themed costumes. The statue occupies a central place in the capital city at the junction of Rue de LEtuve and Eikstraat.

It makes one wonder how in the world could such an uncanny landmark come into existence. There are a number of different legends associated with the little pee man.

The most famous story is attributed to the Duke Godfrey III of Leuven. According to the legend the Duke was two years old when his army was engaged in a battle against the Berthouts. The infant’s army pulled a tactical stunt using the two year old baby. They hung him up inside a basket on a tree to entice the enemies. When the enemies drew closer the little boy urinated on them eventually causing them to lose the battle.

Another rather humorous legend has it that the little boy actually saved the city of Brussels from being attacked. He did this by peeing on the burning fuse of the bombs that the enemies were going to use to blow up Brussels.

Another popular legend that is often the one told to the tourists is attributed to a wealthy merchant who lost his little boy in Brussels. He arranged for a search party to help him find his boy. The little boy was finally discovered doing what the statue is made to do today. The statue was then given as a token of gratitude to the people of Brussels that helped to search for the boy.

Manneken Pis around the World

The Manneken Pis of Brussels is not the only little pee man around. Replicas of the statue exist in many other cities of Belgium including Ghent, Hasselt, Broxxeelle and Geraardsbergen. The statue can also be seen in the city of Tokushima in Japan where it was gifted to them by the Belgian embassy.

The little pee man has become a fashion statement around the world. Many interior designers make use of a fiberglass or brass versions of the statue to decorate swimming pools or garden ponds. You will even find the Manekken Pis on a keychain corkscrew or in front of waffle stands in Belgium.