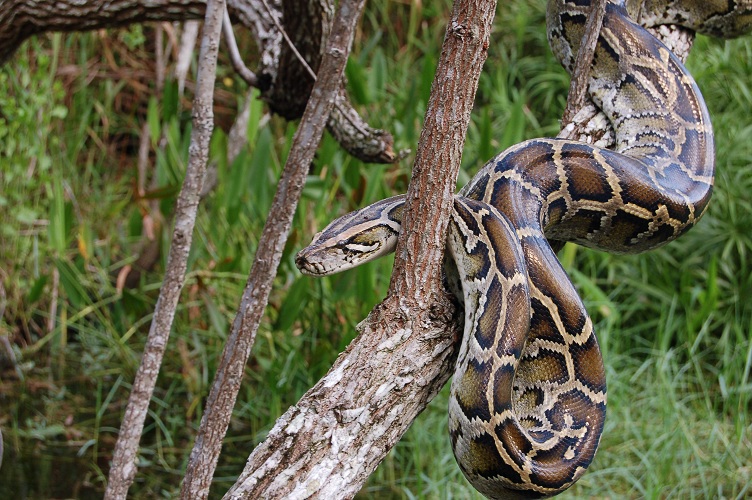 Belonging to the category of Indian pythons, Burmese pythons constitute the biggest subspecies.  These pythons can be found in various parts of Southeastern Asia like Vietnam, Myanmar, Indonesia, Thailand and the southern portion of China. Their attractive and colorful skin pattern is the primary reason why many reptile keepers want to have this python as their pets. The skin of this python is also a matter of immense interest to the people belonging to the leather industry. There are several dark- brown spots present over the underlying light-colored skin. These blotches of brown color are noted in the rear portion of the python.

There is a similarity in the color pattern of this python with the African Rock Python. So, people might sometimes get flummoxed by this close resemblance. Burmese pythons can attain a maximum height of 25 feet and can weigh up to 400 pounds. These pythons can be noticed in marshy and swampy areas, woodlands, rocky foothills, jungles, grasslands, and river valleys. These pythons are fantastic swimmers and can also climb excellently. Prehensile tails are present in these pythons too. When these pythons are young, these are at ease in both trees and ground. These creatures have the capability to stay under water for up to thirty minutes. But when these become older, the weight also increases and hence these reptiles prefer to remain on the ground.

The Burmese pythons are diurnal creatures and spend a large amount of time under the sun to control the temperature of their bodies.  This method also helps in digestion of their meals. But during nighttime they search for their prey. However, it is not a daily activity as once they get their meal they take rest for the remaining portion of the week. Winters are the time for hibernation for these pythons and they find an appropriate hole in the trees or in the bank of a river for that purpose.

Because of the variety of patterns, colors and sizes in which Burmese pythons can be found, many reptile keepers want to posses these exotic creatures. The Albino variety of this python is widely available and very popular. They have a white complexion with butterscotch-yellow and burnt-orange patterns present on the skin.

Since these creatures are carnivorous, their diet comprises of mammals, lizards, birds and other amphibians. , These pythons possess incisive teeth which are pointed backwards.  With the aid of these teeth a Burmese python captures its prey and then wraps the creature around with its own body. Then with the contraction of its muscles the python kills the prey by suffocating it.