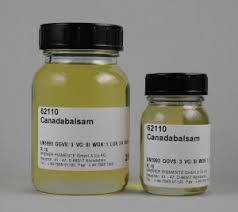 Canadian balsam is commonly known as Canada turpentine or balsam of fir and it is turpentine which is extracted from the resin of the balsam fir tree which is originally known as Abies balsamea.

The resin is commonly dissolved in essential oils and becomes a sticky, viscous, sometimes yellowish but generally colorless liquid. It turns to a transparent yellowish mass when essential oils are allowed to completely evaporate.

Popular Use of Canadian Balsam in Optics

It has a similar refractive index to that of crown glass and thus has a very high optical quality. Originally purified and filtered Canadian balsam was used in optics traditionally to replace glue because it was invisible when it dried.

Since it is amorphous or solid and does not crystallize as it ages, the optical qualities and properties of this resin are retained over time. However it is a poor thermal conductor and solvent resistant material and after World War II it was slowly phased out as an optical adhesive. Subsequently it was replaced by the much more popular and favorite polyester and other urethane based adhesives.
This product was completely replaced when modern-day optical manufacturing technology started using ultraviolet cured epoxies to bond the lens elements.

Traditional and Current Uses of the Canadian Balsam

Canadian balsam is now very scarce and quite expensive since it’s a natural resin available in limited quantities. It was traditionally prepared by collecting the resin from the Abies balsamica also commonly known as the “balsam fir”. This would then be diluted in solvents which are today considered to be extremely toxic and the use of which have been discontinued.

As past historical records show the Canadian balsam mounted preparations are known to last over a century. It also does not mix with water when using it to mount items. This means that a sequence of dehydration is to be followed which starts with low-grade alcohols followed by higher grades of alcohol. This is followed by absolute alcohol or mixed clearing agents and Canadian balsam dissolved in highly toxic materials like xylene. Of course benzene or toluene can be used as a substitute for the same.

Canadian balsam is used in optical technology to join together optical elements for example two prisms which will then form a beam splitter or two lenses.

It can also be used to fix scratches in glass for example car glass, as invisibly as it is possible. Apart from this it is used on oil paintings to facilitate fusion and acquire a glow. It is interesting to note that Canadian balsam is soluble in xylene.