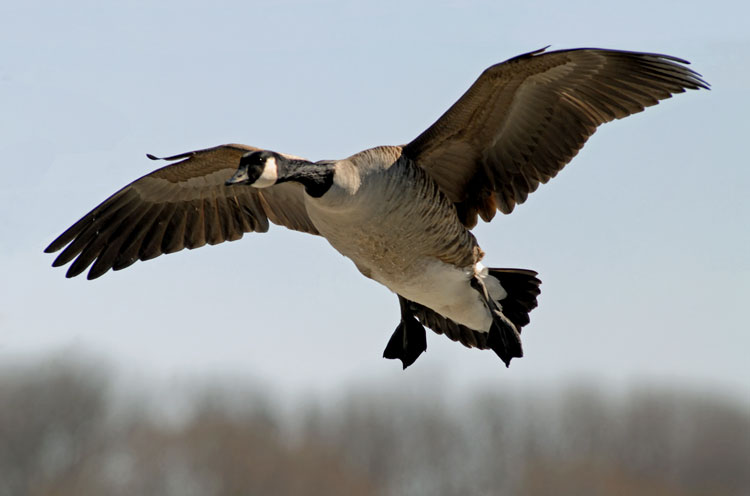 Are you looking for information on how to hunt Canadian geese? Want to know when the goose hunting season kicks off? Read our Canadian Geese Hunting Tips below…

Hunting season for Canadian Geese varies by region, but typically opens the first week of September and ends sometime between December and March. Check your local area for specific information. Likewise, different regions have different limits for how many kills you can make per day and this even differs from week to week within the hunting season. Please become familiar with your areas limits.

Geese are Getting Smarter

Many hunters say that the geese are getting smarter and smarter every year, meaning that it is harder to get as many kills as we used to. This is true. Like every other animal, geese learn and now they are becoming more and more able to recognize specific decoys and even decoy types.
Take the big foot decoys that so many hunters use. We’ve used these for years, guys, and we’ve all made hundreds of kills on them. The problem is that for every kill I get, there are a lot more that I don’t. What I mean is that since Canadian Geese travel in gaggles or flocks, when you kill one, the rest of their group sees that. The next time they see a similar big foot decoy set-up, they’ll remember what happened to their buddy at the last one and won’t bother stopping at yours. They’ve learned to be afraid of and avoid those types of set-ups. (Okay, maybe they won’t learn immediately, but if the flock keeps losing members at stop after stop, they will eventually catch on.)

So, tip number one is to go out early during hunting season. If you can get to the hunt before the birds have learned the tricks from all the other hunters out there this season, you’ll have a lot better luck. The new birds this year have never had any experience to learn to recognize the decoys yet and last year’s birds have probably forgotten about them for the moment.

Tip number two is to continue buying the latest decoys. I know it can get expensive, but if you can be the first one to try something new, you don’t have to worry about the birds already being able to recognize your spread. You’re sure to keep your edge. Once the new product becomes popular, drop it from your list of things to use. It won’t be effective anymore. The more hunters who are using the same product, the quicker it becomes ineffective for hunting.

Tip number three is similar. When you buy that latest decoy being offered in the sports store, make sure it’s an expensive model. You hate me for saying that, right? I promise I’m not working for any companies selling decoys. My reasoning is that when you buy the more expensive models, the less likely it is that other hunters are going to buy that same model right off, again giving you more time to keep the birds unawares to your wiles.