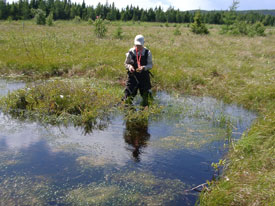 Want to learn more about the Canadian Peat Moss Association? Read on for interesting facts and info on this organization that helps educate people on the used of peat moss…

Sphagnum is a plant genus covering a few hundred species of moss. These are called peat moss because they are usually found in peat bogs. Bogs are formed when the water at ground level is acidic and the dead moss (or sometimes dead lichen in colder climates) gets deposited in the wetland bog area. The water from these wetlands is brown in color from the tannin in the dead plants.

Bogs are normally found only in cold, temperate regions where the boreal (cold-weather tree) forests can also be found. The largest bogs covering six hundred thousand kilometers can be found in the Siberian lowlands in Russia. A sixth of Ireland at one time was also covered in peat bogs. Canada has the second largest area covered by bog in its sub-arctic boreal regions, a total of about one million square kilometers spread across all of northern Canada.

Bogs are very early forms of coal formation and the peat has high carbon content and can be used as a fuel. Russia extracts nearly a hundred million tons of fuel every year from its peat bogs. Wild blueberries, cranberries, lingonberries, and huckleberries also grow abundantly in the bogs. Some wood can be found partially preserved in the bogs and this bog oak can be used to make furniture.

The major use of bogs which most people are familiar with is the extraction of the peat moss itself. This is most well known because it is packaged and sold to amateur gardeners to add to their soil in order to enrich it and increase plant growth. The nutrient rich peat moss is as ideal for this use as compost and manure.

These days, due to the somewhat fragile and sensitive nature of the peat bogs, most countries strictly limit recreational activities in the bog areas, especially outlawing the use of all-terrain vehicles which have proved to be very damaging to the environment.

The organization claims that the Canadian peat moss industry only harvest from 40,000 acres out of Canada’s 270 million acres of peat bogs. They also claim that since it takes up to thirty years of harvesting to fully deplete a bog, only three thousand acres have so far been completely harvested and these have been left to regenerate. In short, the CSPMA does a wonderful job as the mouthpiece of the Canadian peat moss industry.