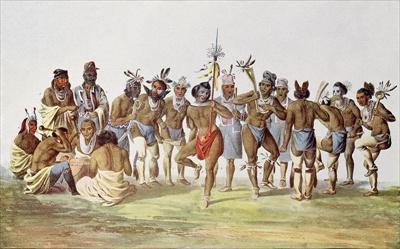 Canada is not as well-known for its art and painting as France, Italy, or even the United Kingdom and the United States. However, there is an eclectic group of painters who it is worthwhile to study. The best place to study them is at a museum or maybe in the countryside as we shall see below.

The oldest Canadian art is the Indian rock art that has been studied in depth by scholars in the Canadian Shield as well as the Great Lakes area. Rock art is generally divided into two categories. Petroglyphs are carvings that have been etched into boulders or cave walls by means of stone tools. Pictographs on the other hand are true paintings in the modern sense that are made by applying dyes to the rock, primarily red ochre, with the artist’s fingers or brushes.

The Algonquian (the word literally meaning relatives or allies) family of languages unified the Native Canadian and Northern US people from the East Coast to the Rocky Mountains. Major tribes whose paintings have been studied include the Cree-Montagnais and the Ojibwe of the Eastern Great Lakes. These paintings shed important light on the old culture of the Algonquian people (the First Nations as they are known in Canada). The paintings mostly deal with spiritual matters such as the importance and meaning of dreams and the visions glimpsed in trance, health and medicine-man matters, and matters of the Manitou which is supposed to be the spirit hidden in every plant, stone, and animal. As such, these paintings are priceless in glimpsing the nature of the old animist culture of the Algonquians.

Peter Rindisbacher died young at the age of twenty-eight in 1834. However, even in his short life he had a lasting effect due to his unique skills with watercolors and charcoal illustrations. After migrating to Manitoba from Switzerland when he was only fifteen, Rindisbacher spent his life illustrating the daily life of the Cree, Sioux, Chippewa, and Anishinaabe tribes.

Rindisbacher’s work actually preceded George Catlin, who is widely reputed to be the first to paint the Indians of the Great Plains, by a whole decade. Most popular are the paintings showing First Nation communal life. “The Chippewa Mode of Traveling in Spring and Summer” and the “War Dance of The Sauks and Foxes” are important pieces. “Hunting The Buffalo”, an excellent 1825 painting from a buffalo hunt in Manitoba, was recently sold to a US buyer. Other iconic art is the 1824 “Inside An Indian Tent” which includes a self-portrait of Rindisbacher along with a group of natives inside a teepee.

Berczy came to Toronto (then called York) in 1792 already aged forty-eight years. He painted a historically important full-length portrait of Thayendanegea, the Mohawk chief, in 1805 and mostly covered other historical figures in his portraiture although there was some important coverage of architecture also.