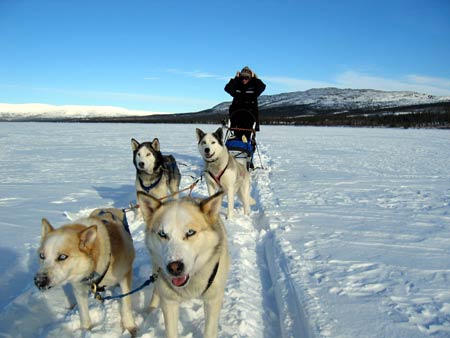 The Canadian Sled dog is primarily a working dog which is considered to be quite rare. As the name suggests the dog was purposefully developed for pulling sleds during the winter season on snow massed terrain. The moderate sized dog can weigh up to 50 pounds at average with an average height of 23 inches.

Also known as the Seppala, this is an extremely versatile sled dog that can perform a wide variety of jobs. The list of tasks that the Canadian Sled dog has been made to perform include dogsled transport, freighting, skijoring, dog packing, Sled dog racing as well as recreational dog sledding.

Due to the fact that this particular breed of dog has been working alongside human beings for a long time it has developed a natural people orientation which makes them very affectionate towards human beings. In fact the Canadian sled dog longs for closeness and solid relationships with their masters. This is why they require special care even in the kennels as breeders are required to develop loving relationships with the dogs.

You would find that at times the Canadian Sled dog can be very outgoing where as on the other hand they may display shyness in front of strangers. The dog is admired for its stable temperament and docile nature. In general aggression, shyness and nervousness are considered to be alien to the true nature of the breed.

The foremost quality of the Canadian Sled dog that has earned it its reputation is the dog’s natural Sledding ability. The dogs have a natural tendency towards performing this duty. Owners of this breed often introduce the young pups to the harness at a very early age which may even be as young as 3 1/2 months. As soon as these dogs are introduced to the harness they display their natural inclination to pull. As the dogs grow older they develop a very serious working attitude. This attitude along with their determination to perform in the most extreme conditions is what makes the Canadian Sled dog a very useful canine.

These working dogs are renowned for their courage which they display on duty. At the same time these dogs are quite intelligent and do not cross the line to become reckless. They are well aware of danger as it approaches but do not fear facing it. They are also known to have a cooperative nature which helps in training them to perform their duties.