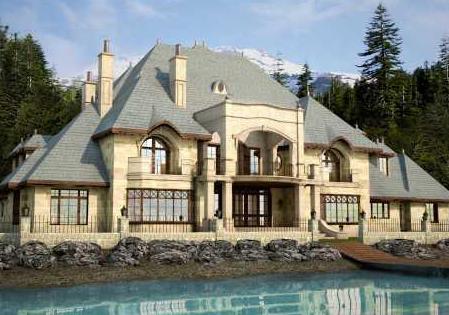 When the British government took control of New France in 1963 as a result of the Treaty of Paris, it spurned the change of traditional French Canadian architecture towards a more British style. The British discarded the Frenchmen from Acadia and renamed it Nova Scotia. The settlement was populated with American colonists who were responsible for bringing in their own forms of architecture.
As the 19th century progressed Canada saw the architectural forms of Great Britain or the United States mingling into the architectural and metropolitan landscape. But revivalism spurred a return to the French Renascence and Provencal styles within 50 years. The French-Canadian houses normally consist of picturesque cottages which had very pleasing vistas along with creatively decorated window and courtyards.

It is a popular style of architecture in residential design all across Canada especially across the coast line on the northeastern seaboard where the French had populated the Canadian land and spread their culture and traditional design style. French-Canadian houses follow either the Provencal style or the Parisian style of architecture both very distinct and unique in their own way.

The Provencal Style of Architecture

This style focuses on the eclectic and functional mix in every piece displayed in the home. The Provencal style followed in French-Canadian houses is a simple and charming one with neatly structured façades and pleasant vistas on the exterior and functional rooms and furniture on the interior.

The exterior is normally created out of pre-fabricated wood with insulation to protect against extreme weather conditions prevalent across most of Canada. The porch and gardens or patio are decorated with greenery, shrubbery and a different mix of plants to create a natural oasis and of course the water element like a fountain or waterfall is essential.

The windows as seen from the outside are large and inviting allowing the maximum amount of light inside during the summer months. On the inside the window treatments are very basic with twill material in repetitious pattern or light lacy fabric layered over a heavy curtain to prevent heat from being lost during the extreme winter months.

Flooring is often made out of dark polished wood and contrasted with the pastel colored walls. Bedrooms usually consist of large windows and if the home has the terrace or balcony it is fitted with plants and accurate furniture to enjoy the soft summer sun.

This is more elaborate and glamorous architecture reminiscent of the Napoleon III era and the French Renaissance. The exterior of such homes are glamorized with fancy windows and double layered window shutters. Rich wooden floors line the base of the house and the walls are often wallpapered with elaborate yet monochromatic wallpaper which looks like a rich fabric covering the wall.

The use of marble is very common in the kitchen and furniture and design becomes more elaborate and the use of crystal, gloss and fancy fabrics throughout the house. The French-Canadian houses decorated in the Paris style exudes luxury through each piece used as a fitting or decorative item in the house.