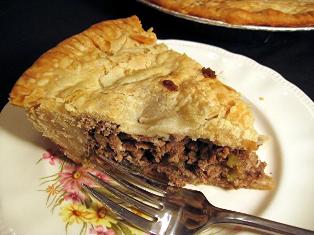 The classic recipe for a French Canadian meat pie can also be slightly altered to meet your own personal taste. The traditional recipe is based on ground beef; however, it can easily be altered to create a stronger pork flavour. It is also an option to create your own crust from scratch or to use mashed potatoes as the top as opposed to a traditional pie crust.

Around the holidays many people find they like to make more than one meat pie at a time which can easily be done by simply multiplying the ingredients listed below as they produce only one French Canadian meat pie. A French Canadian meat pie has ingredients that are commonly found in most local markets. In order to make one meat pie 1lb of ground beef along with 1/2 lb of ground pork is needed. In addition to the meat, 1 coarsely chopped onion will be used along with 2 tsp of salt, ½ tsp of pepper, ½ tsp of celery salt, and ½ tsp of savoury for flavour. The recipe also requires ½ cup of hot water to be used in the cooking process along with 1 cup of mashed potatoes and one nine inch pie crust including a top.

A French Canadian meat pie not only has simple ingredients but the cooking process is also relatively easy, albeit time consuming. The first step in the traditional recipe is to cook, using a large pan or skillet, the beef and pork until cooked all the way through. Near the end of this cooking process the onions should be added and browned along with the meat. Once this has been achieved, the water should be added to the pan along with the spices. The pan should then be covered with a lid and the ingredients allowed to simmer for 45 minutes. During this time span, the potatoes should be cooked and mashed. Once the ingredients in the pan have simmered the mashed potatoes should be stirred in and the mixture should be allowed to partially cool. Once the mixture has cooled, it should be spooned into the pie crust like a filling and the top of the crust should be placed on top. The completed pie should then be placed in the oven and baked at 400 degrees for 15 minutes. After 15 minutes have passed the heat of the oven should be reduced to 350 degrees and the pie should be cooked for a further 30 minutes.  After the meat pie has finished baking, the pie should be allowed to cool before being enjoyed.