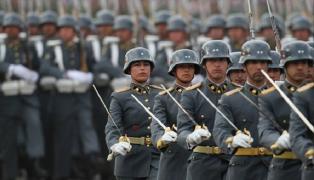 Want to know more about the Chilean Army? Read our guide for facts and info on Chilean Army equipment and objectives…

Consisting of over 45,000 persons the Chilean army is the land arm of the country’s military. The man force of the army is divided into seven divisions along with which it has a special operations brigade as well as an air brigade of its own.

There are a number of reasons that have contributed to the success and development of the Chilean army. The foremost amongst these reasons is the fact that it has managed to win the support of the United States. At the same time it is also supported by other major powers such as Germany, United Kingdom, Netherlands, Switzerland, Spain, France and India.

The Chilean army has also been active in united efforts for peacekeeping around the world. It was an active member of the UNIFIL up until the early 90’s. It is currently a contributing member to the United Nations Peacekeeping Force in Haiti with its Minustah wing. Similarly it also has its battalion up in Cyprus in the form of UNFICYP.

In recent years the Chilean army has added a host of technologically advanced equipment to its already overwhelming collection. Amongst the greatest additions to the army equipment are Leopard IV tanks that have been acquired from the Netherlands Army. USA and Italy have made their contributions in the form of M113 armored personnel carriers. The Chilean army has also received AIFV-B APCs from the Belgian Army via the SABIEX and M-109s SPH from the Swiss Army.

There is a lot of other new equipment which is due to the Chilean army. This includes the latest Leopard 2 A4 main battle tanks from Germany. This is bound to further fortify the country’s defense capabilities. In 2007 the Chilean army received a massive fleet of 200 Humvees from Germany.

Basically the main aim of the Chilean government is to have an ultra modern, fully mechanized army. The country aims to achieve this objective latest by 2015 and is almost half way there.

The operational structure of the Chilean army is also being modified. They are currently involved in creating special operations and armored brigades spread out across the country’s landscape. The current divisional scheme has however been conserved. New attacks helicopters, Flakpanzer Gepard self propelled anti war vehicles and more M-109s are currently being sought after by the Chilean army.

The current count shows the Chilean army to have a total of 202 Leopard 1s, 139 AIFVs and 427 M113s. The 140 Leopard 2s that the army is set to receive from Germany will be added to this count. Along with these battle vehicles the Chilean army is well equipped with personal assault weapons of the most advanced nature.