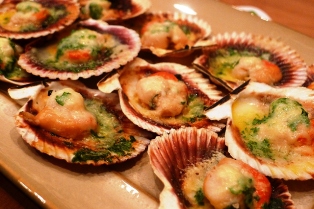 Want to learn more about Chilean Cuisine? Read our guide for insight into the diverse and rich cuisine of Chile…

Chilean cuisine is a unique combination of Spanish influence with traditional Andean cuisine. Add to that the variety of traditional indigenous ingredients and additional influences from Europe, Italy, France, Germany and the Middle East.

The sheer variety of flavors and remarkable colors is what sets traditional Chilean cuisine apart. The fact that Chile has a long coastline stretching for its entire length provides the Chileans with abundant variety of ocean products. This adds further diversity to the Chilean cuisine.

The neighboring waters are rich with a number of special varieties of fish and shellfish in particular. The most popular amongst them is the Chilean sea bass followed by picoroco and the loco. The country of Chile is also one of the largest producer’s of wine in the world and they make use of it in many of their recipes.

Since the map of Chile is composed of different typographical terrains the availability of products differs. Similarly recipes vary accordingly. Generally the cuisine of Chile can be divided into three broad regional zones. These are the cuisine of the North, Central Coast and the South.

There is no doubt about the fact that the indigenous people have had a profound influence on the cuisine of each region. Each community implements its own traditions and customs and makes use of their favorite items such as seafood, fish, meats and poultry. However the role of foreign influences in shaping Chilean cuisine is also great. This is especially true with respects to the variety of desserts and drinks.

The major crops of Chile also factor in to giving shape to Chilean cuisine. Olives for example have been grown in the region for ages. Not only does Chile make abundant use of olive and olive oil in their own cuisine but are also large exporters of the fruit. The use of olive and other products derived from the fruit is particularly common in Northern Chilean cuisine as this is where olives are found in plenty.

Another native fruit that is commonly used in Chilean cuisine is the Chirimoya. It is grown in the Andes mountain regions and is quite popular amongst the masses. Chile is also rich with a massive yield of maize known as choclo in the native language. Maize serves as the staple diet of the Chilean people and the cuisine of Mapuche tribe is centered on maize.

Lucuma is yet another subtropical fruit native to the Andean region. The nutritious fruit is a common ingredient in desserts such as ice cream as it serves as gelatin. An endemic shrub known as the Ugni Molinae has been in frequent use amongst the Mapuche tribe. Lucuma is used in the preparation of marmalades.