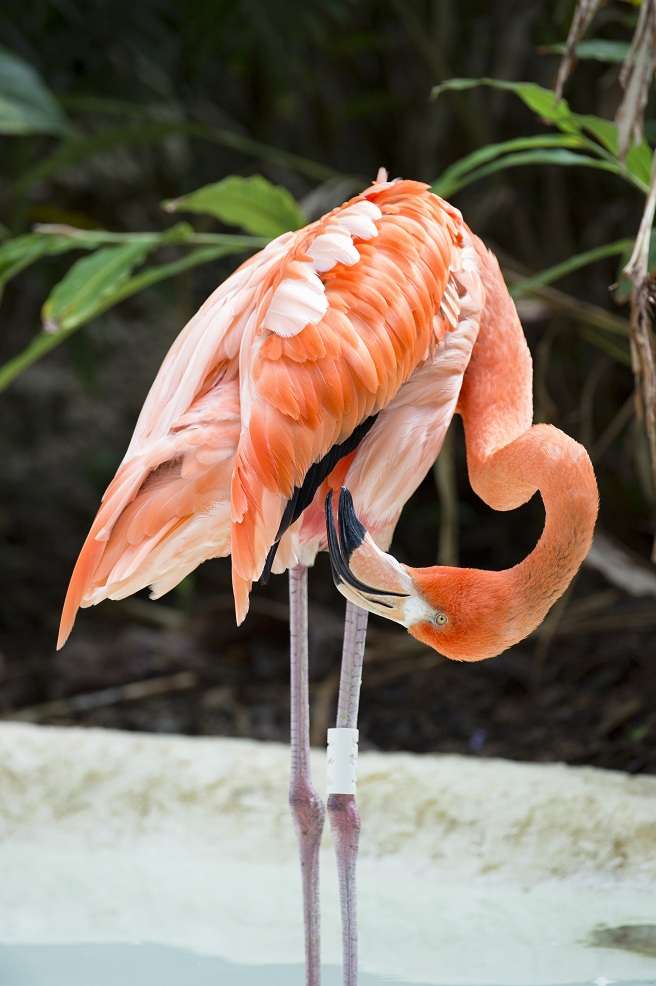 Natural beauty is captured gracefully in the Chilean Flamingo. These pink birds of the salty lakes brighten up the Chilean landscape in abundance.

This gorgeous bird is an inhabitant of lagoons and shallow salty lakes. The Chilean Flamingo weighs approximately 13-16 pounds and can be as tall as four or even five feet. The long neck and slender legs are a trademark of this bird. Interestingly their bill is bent downward in the middle as they swoop down into the water to collect their food. The body is covered in pale pink feathers which darken towards the wings which end in black tips. The legs are yellow or grayish yellow with dark pink bands at the joints and their feet are pink in color.
Flamingoes stand on one leg to conserve heat; they lock their knees which are actually their ankles, to get into this position. They have a sharp sense of hearing but poor sense of smell. They stand facing wind wards so that rain or water does not penetrate the layers of feathers and make them loose body heat.

The Chilean Flamingo is found in flocks numbering up to a thousand birds in a group and these noisy birds can raise quite a storm with their incessant honking and grunting sounds. These birds of a feather do flock together. The group is home to all their activities including mating, breeding, flying and feeding. They also use this group as a shield against predators, commonly humans and gulls who eat up their eggs.

These birds are classified as filter feeders and survive on seeds, and algae from the mud and shallow water. They kick up the mud with their feet as they walk along the lake edge and then swoop down to filter water through their beaks. The tongue flushes out the water which is pushed out through a spiny row called the lamellae along the edge of the bill. The lamellae trap the food which the bird can gulp down. The pink color comes from the pigments that are found in the food they consume. The pigment is referred to as caretonoids. This pigment is often added artificially when flamingoes are kept in captivity.

Courting is an elaborate ritual with rigid head and wing movements executed by both the male and female. They prepare specials nests from mud and pile it high in a large mound which is from 1 -2 feet tall and 15 inches in diameter. The female creates an indentation where the eggs are to be laid. The incubation period ranges from 27-31 days and both parents sit on the eggs. The hatchlings are born with gray feathers and their beaks at birth are straight. They are fed regurgitated food by the parents and after a few months the beaks begin to curve. Their adult plumage sprouts at the age of two and they are sexually mature by the age of six and can have a lifespan of up to 50 years in the wild.

The Chilean Flamingo is on the Convention on International Trade of Endangered Species (CITES) Appendix II since the populations are decreasing due to shrinking habitat due to abuse and encroachment by humans.