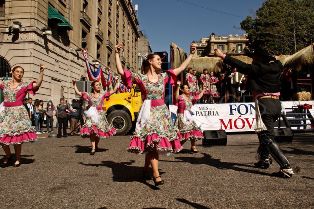 Want to know about Chilean public holidays? Read our guide for facts and info on Chilean national and religious holidays…

Independence Day is the most important national holiday for the Chileans. This is celebrated with parades and patriotic speeches on the 18th of September. May Day on the other hand is a globally celebrated holiday in many countries of the world. The Chileans have another important National Holiday which is known as the Army Day. This falls on the very next day of the Independence Day national holiday.

The country celebrates Navy Day on the 21st of May. This day is celebrated in commemoration of the magnificent triumphs made by the Chilean Navy throughout history. The country also celebrates Columbus Day on the 12th of October. This makes up the collection of national public holidays in Chile.

The first day of the year is always a public holiday as per Christian tradition. However New Year’s Day culture has now spread to other non-Christian societies as well. Good Friday is the next to follow celebrated on the 6th of April. The very next Saturday is considered to be Holy Saturday and is a public holiday in Chile.

June has its fair share of public holidays with the first of them being the Corpus Christi celebrated on the 7th of June. The 29th of June is another holiday known as the St. Peter and Paul’s Day. There are no public holidays in the month of July. However right about the mid of August is Assumption Day. The 11th of September is another public holiday by the name of Reconciliation Day.

The 1st of November is celebrated as All Saint’s Day which is another important Christian holiday. The month of December has the most important religious holidays with the first of them being on the 8th of December known as the Immaculate Conception. The last holiday of the year is that of Christmas celebrated on the 25th of December.

Visitors to Chile should also know that they have a unique concept where the nearest Monday is considered to be a public holiday in case one of the main public holiday falls on a regular day.

The people of Chile have all sorts of customs and traditions that are brought to life during public holiday celebrations. These holidays see ancient traditions of the Chileans coming to the forefront of the celebrations with a dash and hope of a better future.

The religious festivals are celebrated with full fervor but with a different flavor. The public generally dresses up in brand new clothes and processions are taken out on the streets. In general however the festive spirit is at its zenith during the Chilean public holiday celebrations.