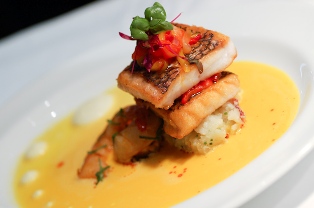 Over the last 15 years the Chilean Sea Bass has become increasingly popular on menus across the world. The reason it is its good portion size, a mild flavor that makes it versatile and complements ingredients, a firm texture and the fact that it cannot be overcooked due to its high fat content, so it’s easy to handle. The Chilean Sea Bass is not similar to the grouper or striped bass and has been classified by the FDA as the Patagonian toothfish. The Chilean sea bass is similar to the Pacific Black cod and is a fish of cold and deep waters hence the high fat content. It contains the natural anti-freeze omega – 3 unsaturated fats which keeps it alive in its natural habitat.

Due to its high fat content it can be easily grilled, broiled, seared or sauté because the fish does not flake too easily and handles easy when you are cooking.

Since the popularity of this fish has peaked over the years, there is over fishing and this is a slow growing variety. The stocks fished in the past decade have been in growing for over 5 decades and stocks will not only dwindle with over fishing but also the sizes will become increasingly smaller as they will be fished before time.

Let’s start you off on experimenting with the unique flavor and easy texture of the fish with a simple recipe and enjoy the fish while it is still available with ease. You can replace your own favorite saucy mix of veggies for the pepper combination.

Place a wok over medium-low flame and heat 2 Tbsp. olive oil. Sauté the peppers and onion till the vegetables begin to wilt. Do not brown the onion, add the minced garlic and cook to release flavors. Mix in the tomatoes and flavor with salt and pepper. Simmer till tender and well blended, for approximately 15 minutes. Remove the refrigerated fish and season it with salt and pepper on both sides and let it sit at room temperature.

Using another heavy bottom skillet in which the fish can fit snugly, heat it to high, run the 1 Tbsp. of oil to coat the skillet and add the fish. Cook for two minutes till the bottom half is browned and then transfer under a broiler to heat and brown the top without turning the fish. Broil for 3-4 minutes and then turn over and continue broiling. To check if done, slide a skewer into the thickest part of the fish, it should come out clean. When ready, serve with the browned side on top and spoon the veggie sauce on top and the sides.