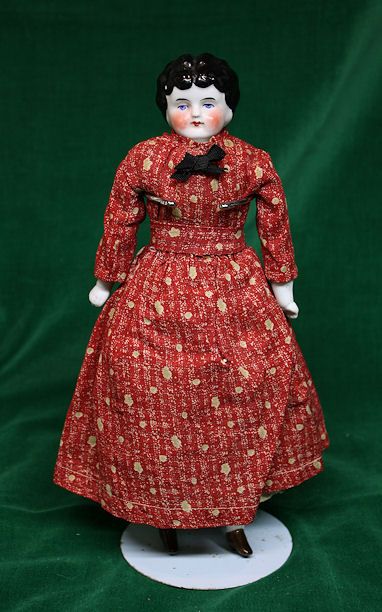 An ancient China head doll is a misleading name for dolls which were popular during the 19th century. To find out more about these dolls and the origin of the name read on…

China head dolls are made from porcelain and were popular toys during the nineteenth century. The term ‘china’ doesn’t have anything to do with China but is a term used for the translucent liquid bisque which can be used for making sculptures. The term ‘head’ is commonly used to refer to these china dolls due to the fact that the entire part from their head till their shoulders is made of china. Also, the hands and feet are made of china and sold as a set. The body was generally for the owner to build and dress it as per their wish.

Children would assign different bodies to their doll-heads and dress them in fancy ways. The holes available on the other body parts of the doll also made of china like hands and feet were meant for sewing together the head and limbs to the body of the doll. China dolls are often referred to as china head dolls because most of the dolls that have survived the test of time and have antique value are just the heads of the dolls that were once dressed in clothes of the owner’s choice.

Importance of the head

The head of an antique china head doll can be used to determine its age quite accurately. The hairs of a china head doll, unlike other kinds of dolls, aren’t ‘real’. They are molded and colored in the form of a hair-style and is permanent. Judging by the hair-style of the doll one can approximately judge which era they belong to.

More about the hairdos

The common hairdos around the 1840s were the Lydia and Greiner styles. The bun accompanied by swoops of hair on both sides was another common hairdo. The 1850s and 60s saw rapid rise in the popularity of china head dolls and with their popularity, the variety of hair-styles they sported also increased. The most common hairdo of this time was the covered wagon hairdo.

The end of the 18th and the beginning of the 19th century saw the low brow type of hair-style gain popularity. Often hairdos of celebrities of that time were reproduced. Towards the 60s and 70s male dolls were also made with the flat top and high brow style being most common. Depending on the hairdo of your china doll, you can quite accurately gauge the time-period to which it belongs. However during the 1900s reproduction of the old style china head dolls became a fashion. Thus, even though the hairdo suggests so, the doll may not be that old after all.

Other ways to determine age and authenticity

There are other ways to determine the authenticity and age of antique china head dolls too. The facial expressions and styles can be used to guess the time period of manufacture. The ones from before 1960 have adult female or male faces while those after 1960s have a more childlike appearance. Also various companies would inscribe their signatures and sometimes the year of manufacture too on the back of the shoulder plate. By finding out the company signatures you can ascertain which company manufactured the doll which can to some extent tell you the era to which the doll belongs.