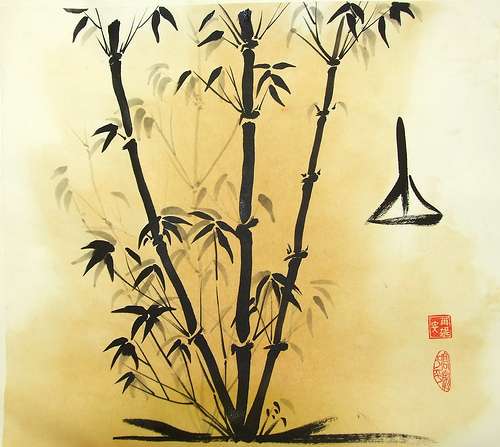 The bamboo tree has multiple uses. Find out how the Chinese managed to create art work using the bamboo as inspiration as well as an actual medium of artistic expression.

The bamboo tree is abundantly found in many Asian countries. It has been a prominent part of the Chinese culture where the love of nature has drawn them towards this unique tree which can be used for many different things. Not only is the bamboo tree used to make weapons, homes and boats rather it has been a popular material to work with in order to create different works of art in China.

The Chinese artists have also taken the bamboo as a motif for their paintings, pottery and scrolls. Such art work was most commonly displayed in the various temples that dotted the landscape. One reason behind bamboo art work being featured in the temples was that the Buddhist dharma encouraged developing a love for nature. Hence the Japanese artists would draw inspirations from different elements in nature with the bamboo tree being one of the most popular themes.

Much of the Japanese bamboo paintings from ancient times that have been discovered by archaeologists were created by followers of Buddhism and Zen Buddhism. The Hokokuji Temple in Kamakura and other temples still feature a wide range of bamboo art work. The bamboo is still a popular theme amongst the contemporary artists of today. Today’s artists seek to take this ancient popular theme and experiment with them using the latest techniques and mediums of artistic expression. This has created an interesting fusion between the ancient Chinese art trend and modern traditions.

The abundance of bamboo in Asia has made it a sort of representative plant of the continent. The bamboo grove along with the seven sages of Olden China have long enchanted Asian arts and crafts for many years.

Painting was not the only medium of artistic expression that made use of bamboo. Rather bamboo art includes a wide range of art forms with sculpture being one of the most popular forms through which the artists sought to express themselves. Examples of ancient Chinese bamboo sculptures can be found that display a great deal of artistic skill and craftsmanship as they feature detailed carvings into bamboo tree trunks and branches. Sculptures of the Daruma face carved out from the bamboo root and vases featuring the daruma are found in abundance in China.

Bamboo was also a common material used in the building of homes. The multi-purpose tree was used especially for creating the thatched roof of Chinese homes thereby giving birth to a new architectural style. The Chinese would construct the roof on highly complex grid systems that incorporated the use of bamboo poles that were held in place using ropes that were made of rice straw.

The Chinese have been intrigued by the unique nature of the bamboo tree which is considered to be a species of grass but possesses the characteristics of a tree. The hollow interior is what makes it unique and one would consider it to be fragile but it is incredibly strong. Along with these amazing qualities the bamboo is also beautiful; this is the reason why it has been used as a popular motif amongst the Chinese artists.