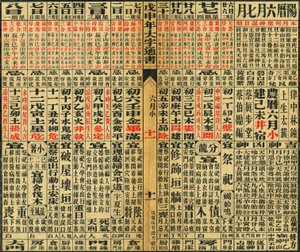 While we make use of ultrasound technology to discover the sex of the unborn child the Chinese had their very own birth calendar for the same purpose long before.

China has been a breeding ground for many great yet strange inventions. Known for their tendency to drift into legendary fantasy along with a mastery over various forms of art it is but natural to expect strange things to originate from this land of inventors. Amongst the unique things that the Chinese are credited for developing is the Chinese birth calendar.

As the name suggests this is a calendar that was developed for the purpose of predicting the sex of an unborn child. Whereas we use the ultrasound technology in modern times to find out the sex of the baby today the Chinese have been making use of this age old invention claiming that it produces 90% successful predictions.

The Chinese birth calendar is said to have been developed some seven thousand years ago by a Chinese scientist. It was discovered buried inside a tomb in Beijing and the original calendar is still in the city being displayed in their institute of science. Since its discovery which was around seven hundred years ago the chart has been duplicated and distributed across China for various reasons and it is easily available on the internet today.

Why did the Chinese want to predict the sex of the birth?

This was not without reason however. China being a country that has always been heavily dependant upon agriculture families required their men to toil in the fields. The nature of the work in the field was such that could only be taken up by the boys. Hence parents hoped for the birth of a baby boy who could contribute in terms of productivity. This narrow minded view point made them look down upon the fairer sex as a burden that is to be taken care of until she reaches the age of marriage.

This is the phenomenon that explains the eagerness of the Chinese people to know the sex of the unborn child so that they could mentally prepare themselves for what is about to come. The question that arises here is that how successful was the Chinese birth calendar in predicting the sex of the child?

Well, when we observe the history of the Chinese culture we find that the locals have always had great faith in the accuracy of the Chinese birth calendar. The statistics vary with some claiming 90% success whereas others saying the chances of it being accurate are fifty-fifty in which case it would mean it’s practically worthless.

Regardless of the accuracy of the Chinese birth calendar we find that over the course of history it has even been patronized by the government as they passed the policy of one child per couple. Today it is taken as a means of mere amusement by the global community as everyone has easy access to it through the internet.