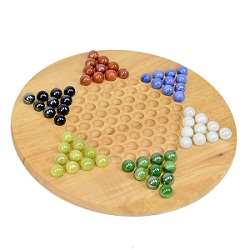 Interested in learning Chinese checkers strategies? Get some great tips that can help you overcome your opponents.

Chinese checkers is a unique game alright but it doesn’t take a rocket scientist to figure out how to play this one. There are however certain strategies and tips that can be learnt in order to better your playing of the game and enable you to secure the victory against your opponents.

Get a Kick Start

One way in which you can improve your game of Chinese checkers is by taking a look at the opening moves of expert players or computer games. One very commonly used tactic by the pro players of the game is that they always start off with moving one of the two pegs that are located at the very end of the front most row. The game allows the player to move this marble one step inwards as well as one step outwards. The best opening move is to start off by taking it inwards towards the center.

The sheep that breaks away from the herd is most vulnerable to be picked up by the wolf. When advancing your pegs in the game of Chinese checkers make sure to move them in groups. Not only does this excel your speed of advancing but it will also increase your jumping chances. Make sure you keep jumping your last peg forward so that it doesn’t get left behind the herd.

Play Against the Computer to Improve Your Skills

If you are looking for a quick way to improve your game then keep practicing against the computer as your opponent. This is because the computer makes precise movements after making logical conclusions of the player’s future moves. You will have a great chance to watch and learn as the computer challenges you with its moves. Traunt Duck is one of the popular games that you can improve your skills with.

Defense is the Best Offense

Whereas you may be in a haste to occupy the destination holes sometimes the best offensive strategy is to be defensive. You can prevent your opponent from claiming the victory by securing your home base. This can be achieved by letting one of your pegs inside your home point as this would prevent your opponent from occupying your triangle with his pegs completely. This strategy is however only effective for a momentary phase in the game because you will not be able to win if you have one peg remaining in your home.

The very nature of this strategy is considered to be against the spirit of the game. Although this is allowed in the traditional way of playing the game you will find many players modify this rule in order to keep the game competitive. In order to overcome this rule a new rule has been developed which declares the person who occupies all the available destination wholes first as the winner.