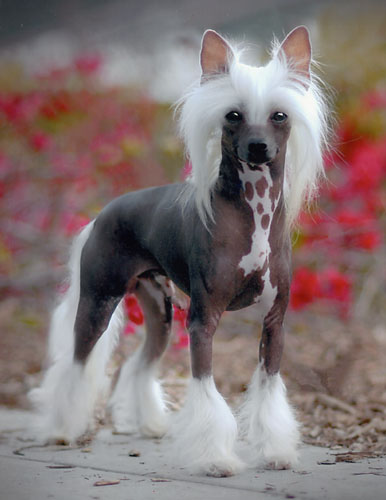 Interested in buying a Chinese crested dog? Get the facts about this unique toy breed that originated from China.

Amongst the many unique things to have originated out of China is a particular breed of dog known as the Chinese crested dog. This is a small sized breed of hairless dogs. The Chinese crested dog exists in two varieties. One is the completely hairless and the other has a coating of fur and is known as the powder puff. Ironically both these varieties can be born in the same litter.

The Chinese crested dog does not have a very pretty face in the ordinary sense of the word. But in the eyes of dog lovers it is a unique specimen that is considered to be a show dog and has managed to win a number of big awards.

The Chinese crested dog requires a considerable amount of grooming care irrespective of the particular variety. The powder puff has a nice soft coat that requires the dog owner to frequently brush it in order to prevent it from matting. The coat of the puff stops to grow after reaching a certain length and the dog hardly sheds its fur.

The skin of the hairless version needs to be maintained much in the same way as the skin of human beings. The dog’s skin is quite sensitive and can be affected by diseases such as dryness, acne and even sunburn. The best way to prevent such problems from occurring is to use oil free moisturizing cream on the dog a couple of times in a week after you give it a bath. Applying sun screen before taking the dog out in the open is also one way to ensure that the dog does not develop any skin problems.

Another unique characteristic of the Chinese crested dog is its hare foot. The dog has particularly elongated toes which are unlike the cat foot normally found in other breeds of dog. This makes taking care of the nails and toes all the more difficult for the dog owner!

The Chinese crested dog can get quite hyper. When the dog is at its playful best it can be quite agile and quick on its feet. Although the dog is classified under the toy breed umbrella it has a stronger immune system than most other toy dogs. This has been noticed by the fact that it does not develop those diseases that commonly affect toy dogs.

There are however certain health issues that you need to be careful about when it comes to the Chinese crested dogs. Poor dentition is one of the common problems in the breed as they have a primitive mouth with a set of pointy canine teeth. Crowded teeth and missing teeth along with tooth decay are some of the dental problems experienced by this breed.

Since the breed of dog is so small and sensitive it is prone to develop certain characteristic diseases common with dogs of this size. Paterllar luxation, progressive retinal atrophy and other common allergies have been found in the breed.