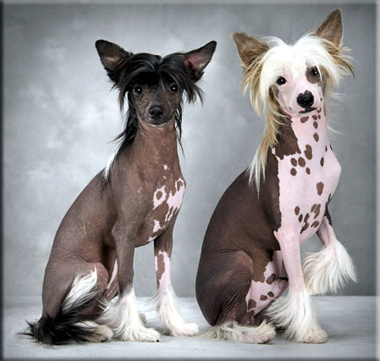 Interested in the Chinese crested hairless? Find out about the unique features and characteristics of the hairless dog that sports humanlike skin.

There are few breeds of dogs that can compare with the Chinese crested dog. This small sized toy dog has not so pretty features that have actually become its claim to fame. The crested dog is more of a show dog, a fashion statement rather than a cute looking pup.

The breed has two distinct varieties. One has a coating of fur on its head and feet and is known as the powder puff. The other is a completely hairless version of the same dog. The two varieties have such distinct physical appearances that an untrained observer may actually think of them to be two different breeds.

The characteristics of the hairless

When it comes to the world of dogs, hairlessness is a dominant trait that can be found within the same breed. Such is the case with the hairless Chinese crested dog. The hairless variety is characterized by its human like skin. You will find the skin on the hairless Chinese crested dog to be as soft as the skin on your hand. The hairless also sports tufts of fur that look like socks on its paws. The dog sports a long tail with a plume and has flowing hair that forms the crest on its head.

A unique feature in this breed is that both the hairless and the powder puff can be found in the same litter. The hairless gene however is the dominant one and has been termed lethal when it becomes homozygous. All the Chinese crested hairless dogs that you will see around you are actually heterozygous.

The hairless variety is not completely hairless however. The amount of hair that the hairless has on its body varies in each pup. The muzzle hair that looks like the beard is most commonly present amongst all hairless crested dogs. The genuine hairless is however characterized by its lack of furnished tail, paws and head as compared to the powder puff.

The hairless Chinese crested dog makes an ideal pet for those individuals that suffer allergic reactions to fur. Although the dog is not necessarily known for its not so pretty face the cheerful nature and the unique looks make it a much sought after breed for dog lovers around the world.