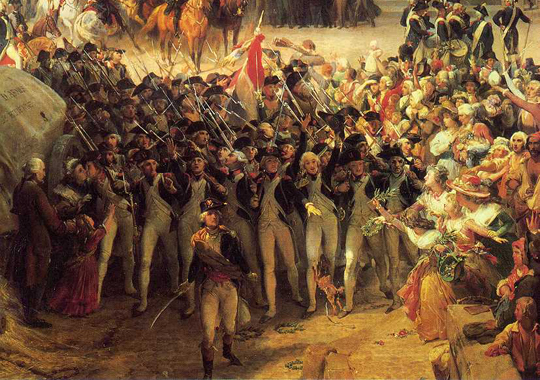 Want to know the most important social, economic & political causes that led to the French revolution? Our guide gives you a brief but insightful look into the conditions that brought about the collapse of the French monarchy and the creation of a ne

A number of political, social and economic issues that were interconnected and related partly to the involvement of France in the American War of Independence contributed to the French Revolution. The inflexibility of the old command in the face of a shifting social order led to its downfall to some degree. The aspirations of a rising bourgeoisie, linked with indignant peasants, wage-earners, and individuals of all classes who had come under the sway of the ideas of the Enlightenment led to the fall of the old French regime. As the revolution progressed, and as power decentralized from the hands of the monarchy to legislative bodies, the incompatible interests of these two groups that were once united became the basis of clash and carnage.

Proto-revolutionary activity began when the French King Louis XVI (1774-1792) faced a fiscal crisis due to some of the reasons outlined above. Even earlier, during the reign of Louis XV (1715 – 1774), several ministers, notably Turgot, the Controller General of Finances and Jacques Necker had unsuccessfully tried to revise the French tax system to a more equitable system. These measures were consistently resisted by the “Parlements” (Law Courts) which were dominated by the “Robe Nobility”.

A poor financial situation and a national debt that had gone out of control, both of which were caused and aggravated by a grossly discriminatory system of taxation, the colossal spending of Louis XVI and the wars of the 18th century; a hatred of royal despotism; a desire for liberty and the belief in a republic form of political system; a resentment of the Medieval system of land ownership by the peasants, wage-earners, and, to a lesser extent, the bourgeoisie all contributed to the uprising.

Compounded to the above were the rise of enlightenment ideals and the scarcity of food in the months leading to the revolution. Even if food was available, the high unemployment rate and rising prices resulted in the inability of the people to buy even bread. Also there was a dislike of the noble privilege that existed and dominance in public life by the ambitious professional classes. Religious intolerance contributed to a large extent to the Revolution. The miserable failure of Louis XVI to deal effectively with these occurrences added fuel to that already simmering angst.

All this anguish and anger came to a fore in May, 1789 when a meeting of the Estates-General was called by Louis XVI in Versailles to discuss and approve a new tax plan. June 17, 1789 saw the Third Estate declare themselves to be the National Assembly and take the Tennis Court Oath. The storming and fall of the Bastille on July 14, 1789 actually started the Revolution and the fall of the Directory in 1799 heralded the end of the French Revolution.