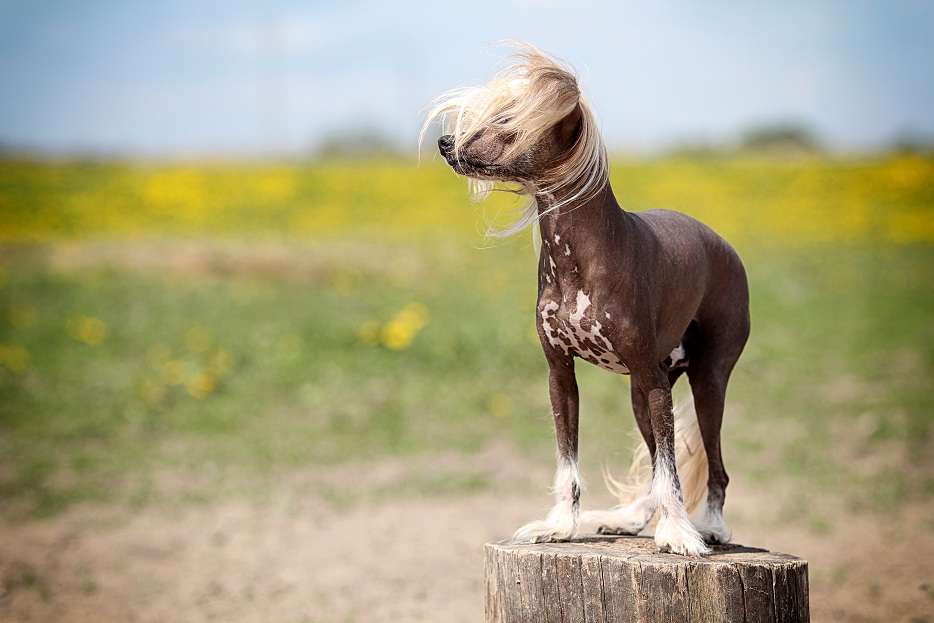 Interested in buying a Chinese crested powder puff? Find out about the unique characteristics of this funny looking dog in our info guide packed full of advice & tips.

The country of China is credited as being the breeding ground for the very first crested powder puffs. It was during the rule of the Han dynasty in 100 BC that this unique breed came about as a result of spontaneous genetic mutations. Although the breed is most commonly known as the Chinese crested dog it is found in many other regions around the world but no where is it as abundantly found as it is in China.

The earliest records of the Chinese crested dog in China date back to more than two thousand years ago. The breed almost faced extinction and if it wasn’t for the breeding efforts of the Americans the crested dog may have very well faced complete extinction.

The unique thing about the Chinese crested dog is the fact that two distinct varieties of the same breed can be born in the same litter. One is a completely hairless version of the dog and the other has a double coating of thick fur and if known as the powder puff crested dog. The fact that the hairless gene is more dominant makes the powder puff all the more rare and special.

The powder puff Chinese crested dog is a small and dainty breed. It gets its name from the soft veil of long and silky hair. The hair is most obvious on the head and the jaw with the feet sporting socks and the tail having a plume of the hair. The powder puff looks strikingly different from its hairless siblings so much so that some people may actually mistake them to be two separate breeds.

Your powder puff will grow up to a full height of thirteen inches at the maximum. It has an average weight range between five to twelve pounds. It has a rather long tail which is held low and should not be altered. There ears are fringed and can be dropped or erect. The powder puff has very unique feet which are extraordinarily long unlike other dogs. This unique feature makes them look as though they have an extra joint in their paws.

The long and silky coat of the powder puff is available in a wide variety of color combinations. The hair on its body can easily get tangled up and requires a constant grooming care.