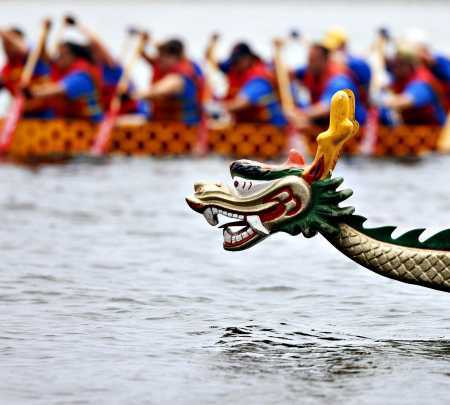 Find out about the ancient legacy of dragon boat racing during which the Chinese would decorate their boats with dragon heads.

One of the ways in which the dragon is manifested in Chinese culture is in the form of a boat. The dragon boat as it is known is a unique and creative innovation that seeks to represent the prominent character of the dragon.

The dragon boat takes on a narrow and rather long shape. It requires a group of paddlers to work the boat. The boat was initially developed more than two thousands years ago in China and today we find it being used in boat racing events that are held across the globe.

Dragon boat racing actually dates back to ancient times. It was actually part of a folk ritual and the boat featured a vibrantly designed dragon head up at the bow. The sport of racing these boats is considered to be one of the oldest forms of organized competitions developed by man.

Such competitions are very colorful as the boats are dressed up as dragons. The two elements added to the boats are the dragon heads and tails. These are made in a rigged fashion with every boat having its own identity of the dragon.  The dragon adornments are what lend the racing event its uniqueness.

The decorated boats set sail during the Duanwu Jie festival that is observed on an annual basis in China. This event which has a special significance in Chinese culture and history is today referred to as the dragon boat festival by the western world.

Being unaware of the history of the festival the western world gave the event the name because of the dragon heads that were featured on the boats. In truth however that is not what the Chinese call the event but nonetheless the name that has been coined by the west has gained currency around the world.

Dragon boats with their heads and tails are found in many different cultures in Asia. Singapore, Hong Kong, Taiwan and Malaysia are some of the cultures in which the dragon boat is found. It is however in China where the dragon is most venerated as it forms a prominent part of the mythological tradition of the country. It is a significant part of the zodiac tradition as it is the mythical character amongst the other earthly animals that represent the years.

Dragon boats were not always used for peaceful purposes. In fact the earlier boat racing rituals involved the opposing team members to engage in violent acts of throwing stones at each other and using bamboo sticks to topple each other. The aim was to topple the opposing team into the water and leave them to drown. The fate of the drowning team was regarded as being the will of the dragon.

Over the years however the sport became a lot more civilized with all the elements of violence being removed from it. Today the dragon boat is decorated in much the same way and can be seen sailing the waterways in many different countries.