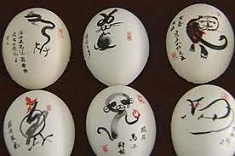 Interested in knowing about Chinese egg art? Find out about the real originators of this unique art form which is mistakenly attributed to other cultures today.

When you speak of egg art the first thing that comes to mind is Easter. Naturally one is likely to consider the origins of egg art to have something to do with Christian culture. This however is not entirely true. It is actually the country of China that was using eggs as a canvas to express their creative ideas long before the Christians ever started to celebrate Easter.

The origins of Chinese egg art predates the advent of Christianity by almost a thousand years. The practice of coloring and adorning eggs was a regularly practiced activity amongst the Chinese tribes of those times. One can however see the common threads that connect egg art presently found in the different cultures of the world.

The symbolism in egg art

For the Chinese the egg was taken as a symbol of fertility and rebirth. Hence the decorated eggs served as a way of enhancing the aesthetics of your surroundings by making use of them as decoration pieces as well as holding them as symbols of the above mentioned concepts. The association of the mythical beliefs associated with Chinese egg art is closely linked to the religious practices of the early Chinese civilizations. This is why we find that the Chinese, much like the Christians of later time would make use of Chinese egg art for special religious occasions.

The Chinese made use of a wide variety of different eggs to serve as their canvas. The migratory birds that would come to the region when the seasons drove them would lay their eggs on Chinese territory. The locals would then steal these eggs from the nests of the migratory birds and paint on them in order to adorn them. Originally the Chinese would make use of dyes that were derived from local vegetation. In this way they produced different colors that were used in combinations to produce strikingly beautiful designs.

With the passage of time Chinese egg art developed intricate detailing as the Chinese gained mastery over the paint brush. No longer did you have simply painted eggs rather the artists would create intricate patterns and designs on to the service of the eggs. Often time eggs would feature different traditional symbols and portraits of important religious figures.

After a few more years the use of different adornments like dangling chains, glitter, stars and dots and other three dimensional objects was also being incorporated in Chinese egg art. The Chinese became well renowned because of the creativity that they displayed in this unique form of art. Eventually many different cultures took inspiration from the Chinese and egg adorning slowly bled into many cultures around the world.

Judaism and Christianity are at the forefront of the religious cultures that adopted the art form from China. Many people mistakenly identify egg art with these cultures rather than China because of the widespread use of egg art in their cultures today.