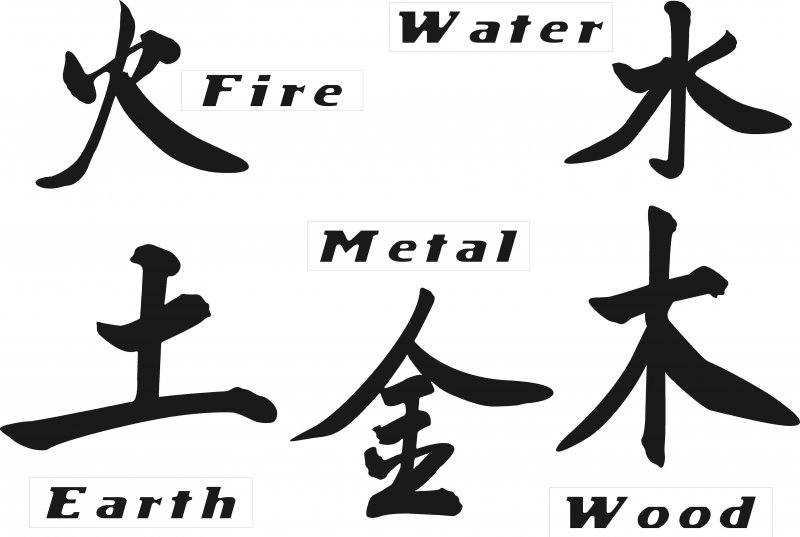 Discover the different elements that make up the famous Chinese element symbol.

The Buddhist dharma has had a strong influence on the Chinese culture in many ways. One of the concepts presented by the religion is that of the five elements. Known as gogyo in the Chinese language these elements are represented in a unique symbolic form that has come to be widely recognized.

The Earth seeks to represent the material world through solid objects that exist in the environment around us. The most frequently used symbol for the element of Earth is stone. There is however a deeper meaning to each element. In the case of the Earth it seeks to represent stubbornness, gravity and stability with resistance to change.

The element of water represents all flowing, fluid and formless things in the environment. Rivers and lakes are the most obvious symbolic representatives of water. With regards to the deeper meanings behind this particular element, it is associated with adaptability, defensiveness and flexibility.

The next element is fire which seeks to represent all the moving, energetic and forceful things in the environment. This element is usually portrayed through predators and other bodies of forceful energy. Motivation, intention and desire are the feelings associated with this particular element.

Wind is taken as a representative of anything that has the potential to grow and expand. Smoke and air are amongst the most popular symbols used to represent wind. The human mind is also taken as a symbol of wind. Open mindedness, evasiveness, wisdom and compassion are some of the innate meanings derived through this symbol.

The fifth and final element which is usually translated as void meaning the skies above seek to represent the unexplainable mysteries of nature. Basically this element is representing pure energy. The spirit and thought are taken as symbols for this element. Creativity and spontaneity are the virtues associated with this symbol.

This last element is considered to be the most important of the five. There are many folktales based around the use of this last element especially when it comes to Chinese martial arts.

Nonetheless when these five elements combine you get what is known as the Chinese element symbol. Connected with nature it is a universal theme that has become popular in foreign cultures as well.