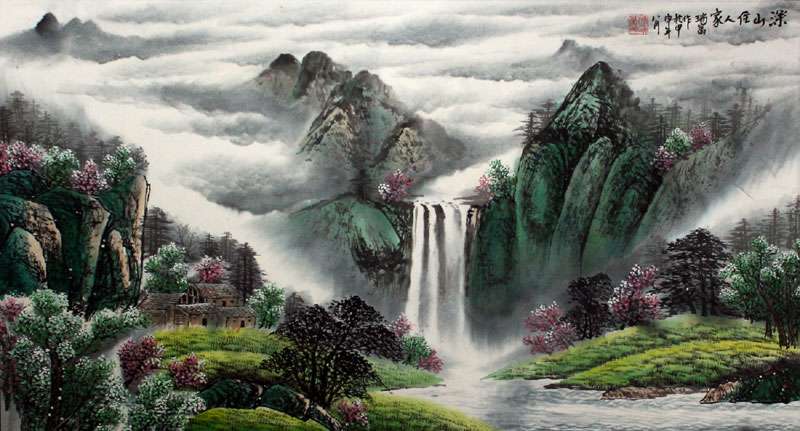 Discover the history and evolution of Chinese landscape art paintings and the message that they bore to people in ancient China.

The landscape scene sought to represent a lot more than the beauty of the natural surroundings however. The Chinese artists would use different natural settings to put forward philosophical ideas and socio-political culture. With the decline of the Tang dynasty the Chinese painters and poets increasingly became fond of the idea of becoming one with nature and blending into the wild. The various paintings sought to describe the broad endeavors of human life through elements in nature.

The Song dynasty that followed was a time period when China experienced nation wide stability. The local painter started looking for metaphors in landscapes to represent this stable state of the nation. Landscape paintings on the other hand also had a feeling of private retreat which was already gaining currency towards the decline of the Tang dynasty.

This new concept of retreating into the natural world away from the politics of life was a movement inspired towards cultivation of the human self and the higher meanings of life. The landscape paintings displayed the mastery that the Chinese had over the use of the brush. The locals developed amazing techniques with the brush as a result of their exposure to the brush with Chinese calligraphy.

Monochrome images of old trees, rocks, bamboo and serene places where one can retire can be seen being featured in Chinese landscape painting. These elements of nature became the symbol of the thought process of the scholar officials of the time.

The Yuan dynasty that followed saw many of the educated Chinese people stepping back from the world of politics and venturing into the domains of art, poetry and literature. The philosophy of escapism started to gain even more momentum under the rule of the Mongols as now the literate elite had their own separate fancies far away from the political drama.

The landscape paintings thus carried a lot more meaning than met the eye. The realistic depiction of an actually existing place was what the observer would see but this depiction carried with it the popular cultural ideas of the time. Landscape paintings were also a very personal mode of expression for the artists of the time as they gave away the individual’s perception of his surroundings.

A later development in Chinese landscape painting incorporated the use of Chinese calligraphy with serene landscape settings. This was a rather unique innovation that took the art form a step further from realistic representation. It was from this point onwards that landscape painting was no longer considered to be about depicting your surroundings.