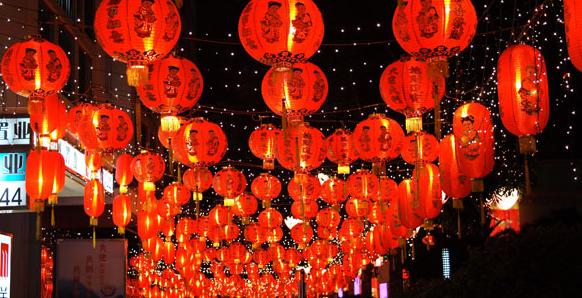 Interested in the Chinese lantern festival? Find out about one of the most important cultural events of China in our information guide.

The fifteenth day of the Chinese lunar calendar sees the local population engage in a festive celebration known as the Lantern Festival. This is one of the most important cultural festivals of the Chinese culture.

During the night of this festival the Chinese youth can be seen carrying a wide variety of paper Chinese lanterns making their way towards ancient temples. Another prominent feature of the lantern festival is the riddles which are printed on the lanterns which the children make an attempt to solve. As such the Chinese Lantern Festival serves as the official seal to the entire saga of Chinese New Year Celebrations.

In early years of the Lantern Festival the masses would make use of relatively simple paper lanterns. It was only the emperor and his noble men that would make use of the elaborately designed exquisite Chinese palace lanterns. Today however Chinese lanterns are available in a wide variety of unique designs for everybody to use.

The concept behind the Lantern Festival

There is a unique concept to the Lantern Festival. Basically it is celebrated on the 15th day of the first month of the New Year. This is also the first full moon of the year. Hence the Chinese create lots of lanterns on earth in awe of the big bright first full moon of the year. The riddles on the lanterns and the eating of the glutinous rice balls are also part and parcel of this tradition.

As is the case with most Chinese cultural festivals there are many legendary stories associated with the origins of the Lantern Festival. In its essence though, the Lantern Festival was all about celebrating a healthy relationship between fellow men, friends and families along with honoring the divinities they believed were in control of bringing back the moon each new year.

According to one tradition the day of the Lantern Festival is actually the birth date of the Taoist god of good fortune. The lanterns were then taken as symbols of good luck and this symbolic representation of the lanterns continues until today.

Although the Lantern Festival is still celebrated in China today not all Chinese people take part in it. While some celebrate it with the same patriotic fervor that existed during the days of old for others it is just a means of keeping the traditions alive.

Regardless of their personal feelings towards the festival one thing is for sure and that is the fact that the Lantern Festival has become a huge tourist attraction for globe trotters. Hence keeping this tradition alive has literally paid off by giving a boost to the tourism industry.