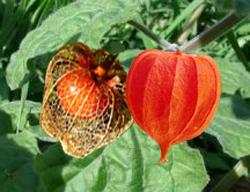 Over the course of history the lantern has become a prominent symbol of the Chinese culture. The Chinese lantern plant however is not a creation of the Chinese. Rather it is a plant found in nature which is admired for its aesthetically appealing fruit.

Characteristics of the Chinese Lantern Plant

The Chinese lantern plant is basically a herbaceous perennial that can live up to an age of three years. This unique plant has some great qualities apart from its looks. It has the ability to withstand extremely low temperatures exceeding even more than -40C.

Ironically the Chinese lantern plant is not native to the country of China. It was first discovered in Japan. It gets its name from the unique fruit that it produces. The fruit is shaped like a balloon and has a papery texture. It is red in color and known as the calyx. In terms of its appearances it looks exactly like the Chinese lantern craftwork.

This rather unusual plant can grow up to a height of 60cm. The leaves of the plant are shaped like a heart and can grow up to 9 cm long. The leaves are most often jagged edged. With alternating leaves on opposite sides of the stem the Chinese lantern plant has a rather unique structure which gives it great appeal.

Hidden below the big leaves are the white inconspicuous five petal flowers of the tree. On full bloom these flowers display a vibrant red color inside a puffed up red colored calyx. The 5 cm long calyces cling together to form a row along the stems.

The branches of the tree with the fruits are used to accentuate flower arrangements. The fruit by itself is edible and is used to make delicious jams around the world. In its unripe stage the fruit of the Chinese lantern plant actually has poisonous potential.

The Chinese discovered this plant a long time ago and began to conduct medical studies on the plant. They believed that the bladder like shape of its calyces indicated that the plant could be used to treat kidney and bladder problems.

The Chinese lantern plant is grown from a seed and is quick to flower. Experts suggest interested individuals should start growing them inside their homes for the first two months.

In order to come into their fullest Chinese lantern plants require a full sun. In terms of soil they will do just fine on average quality soil. The seeds should be sown early in the season and watered during the dry periods. The Chinese lantern plant is susceptible to develop certain diseases but these problems can be treated with the use of insecticides and repellents.

Many people make use of the Chinese lantern plant as a means of decorating their gardens. The big balloon like fruit shell gives the classic touch of the oriental Chinese lantern.