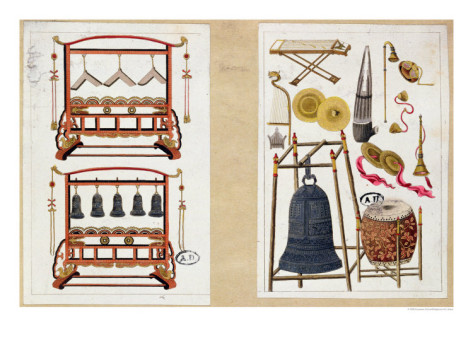 Interested in knowing about Chinese music instruments? Find out as we explore the various instruments used in China through the course of history.

Music has been an integral part of the Chinese culture since the very beginning. Chinese musicians were highly skilled and developed highly complex forms of music using many different instruments. Along with the scales and composing of Chinese music one of the things that give Chinese music its distinct sound is the range of instruments that they used. Some of the most popular musical instruments used by the Chinese are as follows.

The range of plucked strings instruments had many variations of the lute.

1. The Pipa: This is perhaps the most popular of stringed instruments to have originated from China. It had a pear shaped body with thirty frets and four strings. This instrument was developed more than 2000 years ago and is considered to be a very expressive musical instrument.
2. The Liuqin: In terms of its appearance the liuqin looks like a down sized version of the Pipa whereas it sounds quite similar to the mandolin. This instrument was most popularly used in opera performances and folk songs.
3. The Sanxian: This was a three stringed fretless instrument with a long neck. It was made using a wooden box that was covered with snake skin. It was played using a plectrum.
4. The Ruan: The body of the Ruan was shaped like a crescent and featured four strings on its long neck. It was developed during the Qin dynasty.
5. The Yueqin: This was an instrument quite similar to the Ruan with the only difference being that it had a much smaller neck which generated a slightly different sound.

There was another family of stringed instruments that was slightly different than the above mentioned variations of the lute. This was known as the zither family and had its own variations.

1. The Guqin: This was a special zither that had seven strings and no bridges. It was developed more than 3000 years ago which is what makes it the most classical Chinese instrument.
2. The Zheng: This instrument was a unique innovation with movable bridges. The complicated instrument could be played using 16 to 25 strings.

The third family of stringed instruments included variations of the harp

1. The Konghou: This instrument is considered to be one of the oldest ones to have developed in China. In terms of its structure the Konghou was quite similar to the harp as we know it with the difference being that the spanning of the strings was more like the guzheng.

The library of Chinese instruments also included bowed string instruments such as the variations of the huqin family.

The Chinese also developed a very unique stringed instrument known as the Yangqin. This instrument had a square shaped soundboard and in many ways resembled the modern say Satur and was played using two bamboo sticks.