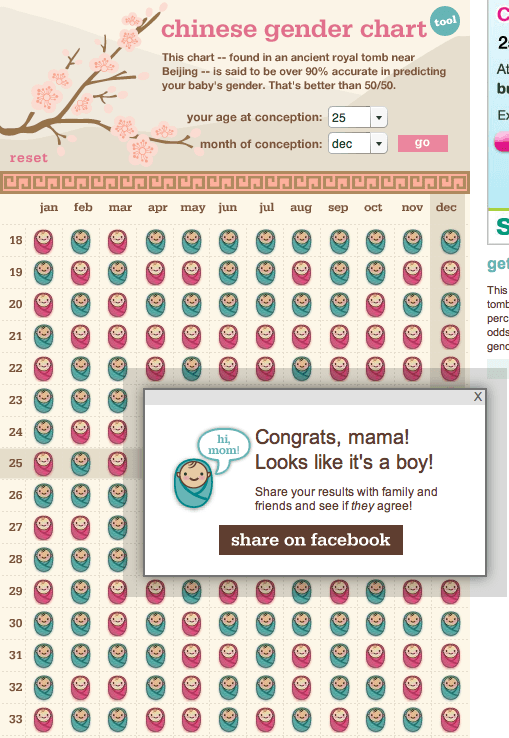 Finding out the sex of the unborn child is something that intrigues many couples. Find out how the Chinese used to do that with the Chinese pregnancy calendar.

A pregnant woman can easily find out the sex of the child that rests inside her belly by the modern medical technology of ultra sound in today’s times. Couples in China were however very eager to find out the sex of their unborn child many centuries ago and actually developed a sort of mechanism that provided them with probable predictions.

Known as the Chinese pregnancy calendar this was a method developed by a Chinese scientist with the aim to discover the sex of the baby long before its birth. The scientist made use of his knowledge of the lunar phases of the moon and drew some cross connections between the mother’s age and the cycles of the moon to conceive the idea of a calendar that could predict the sex of the unborn child.

According to the calendar the couple could find out whether they are going to have a boy or a girl long before the time for conception comes. This was something that was of utmost seriousness to the people at that time. This is because the Chinese were very eager to know the sex of the baby that was going to be born in their house because they would have to plan their lives accordingly.

In later years the Chinese government passed a policy that restricted each family to have only one child. This was a desperate attempt by the government to control the massive population growth that was taking place and draining up the country’s resources. The Chinese pregnancy calendar was greatly popularized by the government during these times so as to offer expecting couples a chance to get some insight into what the sex of the baby could be.

The discovery and accuracy

Discovered around seven hundred years ago and displayed in the Institute of Science in Beijing the Chinese pregnancy calendar is actually believed to have been developed some seven thousand years ago. A Chinese scientist with mastery over lunar sciences is credited with developing this strange and mystifying calendar.

In the face of modern science not many people would trust the Chinese pregnancy calendar with regards to its accuracy. For the locals however faith in the Chinese pregnancy calendar and its accuracy is something that has been handed down the generations. They actually believe it to be able to generate accurate predictions which only sometimes go wrong.