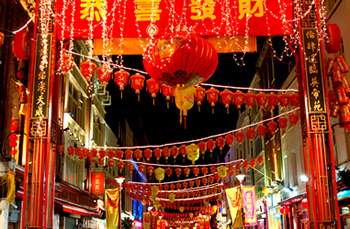 Learn about some of the most important Chinese religious symbols and the highly revered position they hold amongst the people of the country.

Religious symbols in its many forms

When it comes to religious symbols they have taken on many forms in the Chinese culture. Certain types of foods for example are taken as religious symbols. Since feasting is a central activity according to ancient Chinese religious practice it is but natural that certain food types have become symbols for the religion.

The most prominent food symbols associated with the history of Chinese religion are the mandarin oranges which are taken as a symbol of good fortune and wealth along with red jujubes which represent prosperity. The steamed fish is one of the all time classic religious symbols associated with food. It stands to represent long life as well as good fortune. Uncut noodles have been established as the symbol of longevity whereas baked goods are generally considered to represent fertility.

Buddhism is a dharma to which symbolism is a central theme. The character of eternity is ever popular in different forms of Buddhist art and is known as manji. This particular symbol stands for balance of the opposites and universal harmony.

The same religious symbol takes on a different meaning when its position is changed. When the direction of the symbol is turned towards the left the manji becomes a symbol of love and mercy. Alternatively when it is facing right it is taken as a symbol of intelligence and strength. The use of these symbols in their various forms to represent different things is common in other countries as well where the Buddhist dharma prevails.

The origins of the swastika

The swastika which is an equilateral cross with bent arms at right angles is strongly associated with Hitler and his regime. Originally however this symbol belongs to the collection of ancient Chinese religious symbols.

Not many people are aware of the fact that the swastika is actually a symbol associated with Buddhism back in ancient Chinese civilization. Today it is considered to be a highly controversial symbol especially in the west due to its iconic use during Hitler’s reign in Nazi Germany.

Although Buddhism originated in India it spread to neighboring regions in the years that were to follow. It was in China where the religious symbolism reached its zenith. The birth pangs of religious symbolism were laid down during the initial Buddhist years of China.

The manji symbol can clearly be seen in many art works related to Buddhism in China. The symbol is often displayed on the chest of statues as well as on the soles of the feet. To keep the Buddhist swastika different from the one used by the Nazi Germany the Chinese make use of it facing the opposite direction.

Hence we find that the Chinese culture has a vast collection of highly revered religious symbols. The tons of art work belonging to ancient times are a testament to the importance that religious symbolism has played in Chinese civilization.