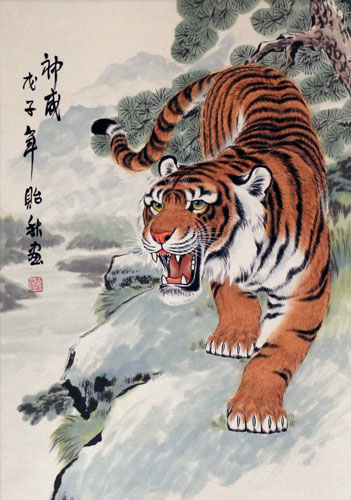 The tiger has been a potent symbol in Chinese art throughout the history of the nation. The animal is one of the twelve characters of the zodiac calendar. As such the tiger is considered to have an authoritative personality that is considered to be t

People born in the year of the tiger are believed to have the various attributes associated with the tiger. Apart from being authoritative they are considered to be courageous yet stubborn and also possess a humanitarian spirit and are very loving towards their friends. Such people are known be natural born leaders and have a long life expectancy.

We find the tiger to be a popular theme depicted through various mediums of art. The way in which the tiger is depicted in the various art forms gives different meanings to each portrayal. The beast is classified as a Yang animal and is therefore associated with the male character. This is why it carries the virtues of bravery, courage, sternness and courage. The tiger in all its glory is considered to be the king of the mountains.

The locals would hang Chinese paintings featuring the tiger on the walls of their homes with the tiger facing the entrance. They would do this with the belief that the image of the tiger carried the potential to drive away demons and protect the house from any sort of evil. The tiger is believed to have a special Ch’i energy which is the reason why Feng Shui practitioners made use of tiger paintings in this manner.

The ancients of China had their own legendary belief regarding the image of the tiger. The animal was considered to be one of the many animal gods. Furthermore they elevated the tiger to the position of being the guardian spirit of agriculture. The farmers would make use of different kinds of tiger based art work to drive away the drought demon.

The tiger has been featured in many different ways in the Chinese culture. Military men were also seen carrying the image of the tiger painted on their shields. This was done in order to frighten the enemy as the tiger was painted in a pouncing pose looking as ferocious as ever.

The Chinese had another unique belief regarding the tiger. They believed that tigers could live for more than a thousand years. According to their beliefs a tiger would turn completely white after crossing the age of five hundred. Hence any tiger art work featuring a white tiger actually means that the tiger has crossed the age of five hundred. They also believed that once a tiger passed away its spirit would enter the earth and become Amber. Historically we find that the Chinese used to call the Amber stone as the soul of the tiger.