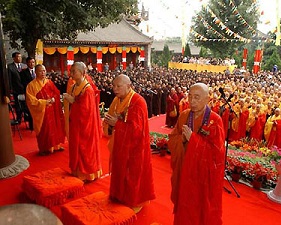 Interested in Chinese culture? Take a dive into the mysterious and complex traditions and culture of China.

The culture of China is one filled with mystery and complexity. There are many unique customs and traditions practiced in the country that have been around for many centuries. Today the world has been exposed to this unique culture and is bent on exploring the various intriguing aspects of the oriental culture.

Historically we find that the country of China has been inhabited by many different ethnic groups. The Han Chinese group has however been the predominant ethnic group throughout the history of China. This is one group that has managed to survive whereas many others have disappeared without leaving behind any traces.

Even within the Chinese Hans there existed great regional and linguistic diversity in the culture and traditions that were practiced around the nation which occupies a large space of land in East Asia. The large area is further divided into regions that have their own sub-cultures.

Traditionally we find that throughout much of the country’s history some sort of monarchic rule has prevailed over the masses. The emperor sat at the top of the pyramid with absolute power over the affairs of the state. The society was characterized by a hierarchic system that divided the public into socio-economic classes. The Song dynasty that lasted from 960 to 1279 brought the melt down of the ancient social structure and gave birth to a new one where education was given primary importance especially for those individuals looking to become part of the bureaucracy.

Men and women both were encouraged to seek knowledge and gain mastery over a discipline. Special teachers and lessons were prepared for the women in order to teach them the virtues that were considered to be essential.

The Various Influences on the Culture and Traditions of China

Mythology and spirituality are prominent features of the Chinese culture. In this connection it may be said that religion perhaps had the most profound influence on the culture and traditions of China. Confucianism was the philosophy that influenced the early Chinese civilization up until the advent of Taoism. Taoist sexual practices and marriage rituals became a prominent part of the Chinese society. There is a constant debate between the scholars of history as to which philosophy had the most influence in shaping the Chinese society.

With the advent of Buddhism from India the cultural practices of China underwent another transition. Many of the traditional practices that took birth under the Buddhist influence and those that were practiced before still are a prominent feature of the Chinese society.

The zodiac calendar and the festivals that revolve around it, the various religious rituals that are practiced in the country, dance performances, martial arts, opera art and other various practices outline the Chinese culture.