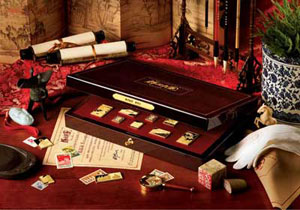 The Chinese people are held in high esteem for their mastery of the calligraphy brush. Find out about the Chinese writing pad & brush which are the main tools of the art form.

Amongst the many things that China is famous for is the art of calligraphy. This form of art has been part of many East Asian civilizations but it was the Chinese characters that served as the basis for the development of this art form.

Not only is the practice of calligraphy considered to be an art form rather it has had a great influence on ink paintings as well as wash paintings. The art of calligraphy led to the development of its various tools which consequently gave birth to a lot of different techniques of the art form which has grown many branches over time.

Ask any artist involved in any form of art and he will tell you that the tools you use make a lot of difference to the work you do. Hence as the art of calligraphy evolved and became a more widely practiced art, thus started flowing in the innovations with regards to the writing pad & brush.

The Chinese are held in high esteem for the mastery that they posses over the use of the brush. This is solely due to the fact that for the longest time they used a brush and ink for writing rather than the pen. The years of experience gave the Chinese calligraphers an excellent feel of the brush and different techniques of using it.

The tools and their importance

The pad and the brush along with the ink and inkstone are the primary tools used for the art of calligraphy. Together they are known as the four treasures of the study.

The paper that you use makes a lot of difference to the outcome. There are pads available comprising of different kinds of specially prepared paper for East Asian calligraphy. The most popular kind of paper used in China is the Zuanzhi. Made from tartar wingceltis along with rice, mulberry, hemp and bamboo this is considered to be the standard paper for any Chinese writing pad.

The classic desk pad is made out of felt. There are certain variations to the desk pad with some of them even featuring grids on either side. When placed under translucent paper it can help guide the user with regards to placement and composing. These pads are most commonly used by students and are available in different sizes.

The traditional writing instrument is the ink brush. Brushes were most commonly made out of bamboo but rarer materials like red sandalwood, silver, gold, ivory and glass have also been used. There is plenty of choice with regards to the hair of the brush as it can be made from a wide selection of animals including the rabbit, wolf, deer, duck, chicken, goat, tiger, pig etc.

An ancient Chinese tradition is to make the head of the brush with the hair of a new born which becomes a souvenir for the child. There is a legend behind this practice but it doesn’t really hold any value with regards to the art form. Today you will find artists to be working on calligraphy with pens but the traditional tool has always been the brush.