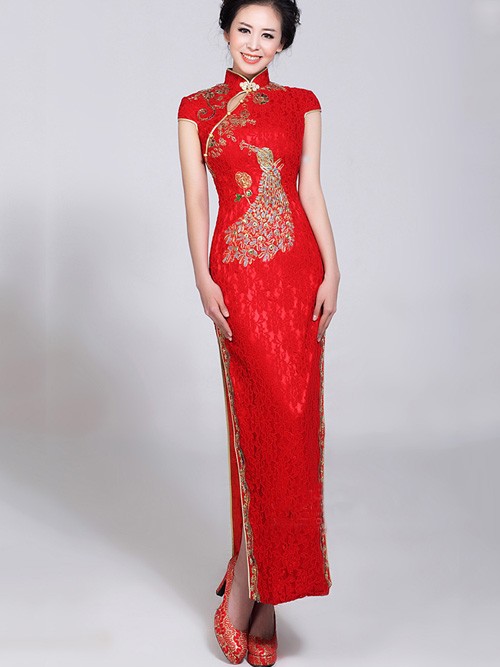 The world at large has been intrigued by the Chinese woman’s dress sense. The traditional clothing of Chinese women reveals it self to be drastically different and extremely creative. Creativity, elegance and grace are some of the qualities that Chinese women’s clothing possess.

This is perhaps the most popular and prominent identity forming Chinese dress for women. It is a dress that was developed a long time ago and has come into fashion in a modified form today. In its essence the Cheongsam is a one piece dress suit that is tightly wrapped around the body. The Chinese also have a male counterpart for this dress known as the Changshan.

Although this unique dress is native to the country of China in recent years it has become popular amongst the global community. You will be able to find the cheongsam being sold in the market as the mandarin gown.

The tight fitting dress rose to extreme heights of popularity during the 1920s. It was in Shanghai where the women belonging to the upper classes of society could be seen sporting this dress out on the streets. Soon enough it became a world wide craze.

With the arrival of the Manchu people in China the fashion amongst the women underwent a transition. The Manchu introduced a new one piece suite for the women. This came to be known as the qipao. In English the name of this translates as the banner quilt.

The qipao was quite different from the cheongsam in many ways. Unlike the cheongsam this dress had an extremely lose fit and would hang straight down over the entire body. The Manchu were very strict with regards to enforcing the qipao upon the Han Chinese people. Anyone who would be unwilling to sport the qipao in place of the traditional Han clothing would be punished by the death penalty.

For the next three centuries the qipao became the official clothing for the women of China. As the public started to get comfortable with the dress they started making their own artistic inputs to the dress in order to make it more exclusive.

Evolution of the Qipao

The qipao had an extremely loose fitting and would cover the entire body of the woman save her face, hands and feet. The baggy feel of the qipao was meant to conceal the figure of the feminine form. With time however the Chinese women started to alter the qipao. The movement was towards giving it a tighter fit and making it more revealing. So much so that the modern standard qipao is a slender fitting high cut dress that is not at all like the original dress.

The modernized version of the qipao first became popular in China as the Zansae dress. It was worn by the upper class women in top notch social gatherings. Today you will find the qipao in many different forms and cuts. From bell sleeves to sleeve less and high necked to back lace frothing the qipao is available in an unlimited variety of styles.