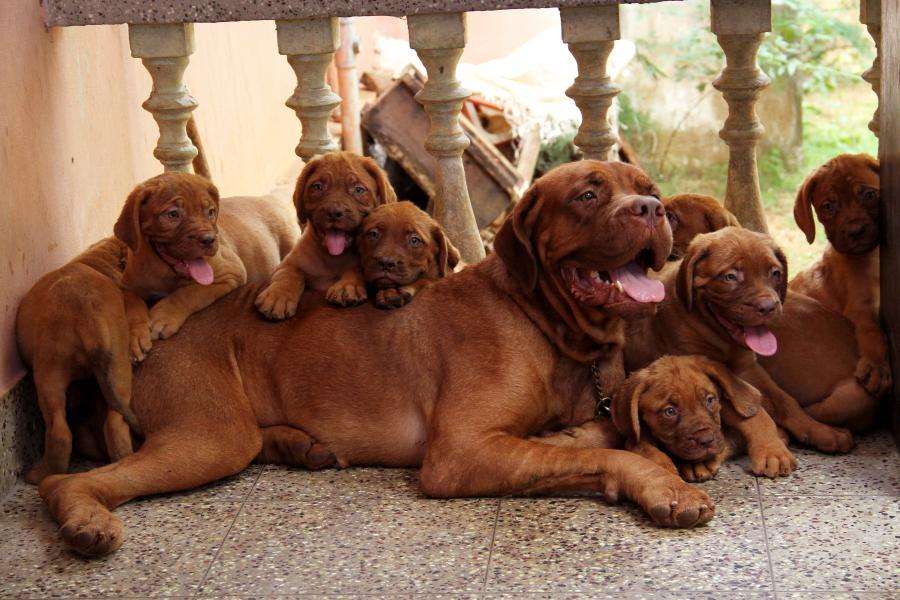 French Mastiff puppies are difficult to breed because of the large heads and usually a cesarean section is needed for safe confinement. The French mastiff bitch will usually deliver a small litter. Another name for the French Mastiff is the Dogue de Bordeaux or Bordeaux Bulldog. The French mastiffs are considered to be the descendants of Greek and Roman Molossus and they were brought in Europe by the Albans.

The dog has been with human beings for a few centuries now and through out it has been used for various purposes like protecting livestock, dog fights, fighting with animals like bears and bulls and a ward dog. It was also used as a personal protector around this time. Many French Mastiffs met their end in the French revolution trying to protect their masters. The breed would have been extinct had it not been for the efforts of the Dogue de Bordeaux club and the efforts of a man called Raymond Triquet , the pioneer of the club. Today the French Mastiff is a popular breed across the world not just in France. They are known for their bulky size, fierce loyalty yet their gentle loving side with children and their owners.

The French Mastiff is a breed with a short coat so you will not have to worry about hair all over your couch if you get this breed plus they are very easy to groom. You will just need to brush them twice a week to avoid hair shedding. The French Mastiff is famous for the wrinkles on their head, so bathing them can be a challenge since you have to make sure that you clean between these wrinkles.

It is also important to keep them well groomed, make sure that you keep their nails trimmed to avoid fungal problems between the toes and also ear infections and injuries due to scratching. Check their ears very often and clean them regularly to prevent yeast build up and infection and wipe their eyes with a damp cloth.

The heavy, huge, stocky built and a wrinkled head are the characteristic trademark features of the French Mastiff.  When showing off this dog in competitions, judges will look for these features along with a powerful jaw. French Mastiff’s have a red coat that is short and shiny. The different shades of red of the coat look spectacular when coupled with the mask around the muzzle and eyes. This mask can be black or in another shade of red. The nose will be of the same color as the mask.

When choosing a French Mastiff puppy, look for papers that indicate breed purity. Also it is important to buy from reputed breeders to make sure that the puppy hasn’t come from the puppy mills. The French Mastiff puppy should be alert, playful, healthy and happy. The best way to keep your dog healthy is through regular veterinarian visits .