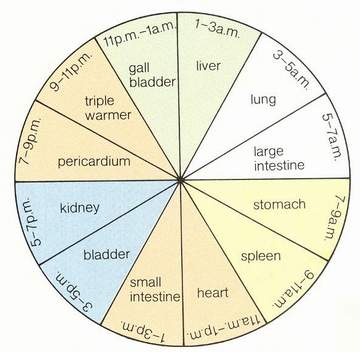 Interested in the use of the organ clock in traditional Chinese medicine? Read on to get an overview of this unique aspect of the Chinese culture.

The Chinese culture is one that is full of symbolism. Even the Chinese writing system incorporates the use of symbols that are void of any phonetic value. Symbols have been an integral part of Chinese medicine as well and the organ clock is an attempt to make the various symbols used in Chinese medicine more comprehensive for the purpose of reading.

There was a dire need to come up with a way in which the mass of information that has been collected on Chinese medicine over the years could be displayed comprehensively. This was made possible by the innovation of what is known as the “organ clock”. This clock has 12 sections and is one of the ways in which the Chinese symbolism for the organ system can be organized.

In order to be able to read the organ clock one needs to be aware of the various abbreviations that are used while displaying the information on the clock. Each organ has abbreviated letters and one can make use of a key to figure out the abbreviations for each organ.

The layout of the clock is determined by the natural order of the energy flow through the body’s system as according to Chinese medicine. The related information with each organ is then added after the basic layout has been conceived.

There is another host of information that the Chinese organ clock displays. The YiJing tidal hexagrams and the earthly branches along with their associated zodiac symbols. The clock also depicts the traditional two hour periods of the day as well as the month and in some cases the agricultural nodes as well.

When it comes to drawing the Chinese organ clock it starts off with a number of circles. Then one of the circles is divided into twelve parts, another into eight, then six and so on. Then you have to place the information accordingly into each divided section. When all the information is put in the correct slots the organ clock comes into its full form making it possible to understand the organ systems.