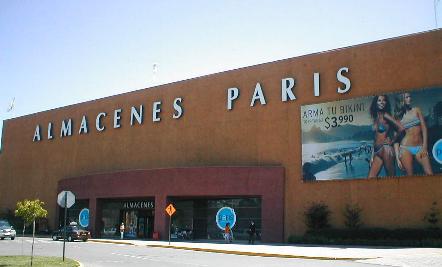 Want to learn more about Almacenes Paris? Read our guide for facts and info on this popular company…

One of the largest accessory and clothing companies in Chile is known as the Empresas Almacenes Paris S.A. This group of companies has a number of subsidiaries through which it offers investments in real estate, bonds and securities. The group also owns a bank and is involved in personal insurance, furniture manufacturing, developing shopping malls and the travel and tourism industry.

The company Almacenes Paris was established in 1900 by a Spaniard named José María Couso, returned to Chile and opened a furniture store in Santiago. The humble store dotted with five employees was named Paris and carried Italian furniture which was a replica of French designs. These were soon replaced by replicas created by local craftsmen. The business soon expanded into furnishings, rugs, mattresses and tapestry. It soon grew into a Department store by adding more home furnishings, and adding clothing to its product line. The business was bought by the son-in-law Galmez and owned by the family throughout the 20th century. Even though there was a severe economic crisis, Almacenes Paris became the first store from Chile to open a branch in the Plaza Lyon in 1983. More stores were opened in 1991 in shopping malls in Santiago called the Parque Arauco and the Plaza Vespucio.

By 1996 Almacenes Paris had six department stores and looked at options like customer parking areas and large format stores, concepts that were unknown at that time in Chile. The Almacenes Paris went public by selling 30% of its shares about 1000 investors and was now a holding company with more than a dozen subsidiaries.

The Almacenes Paris was known for its focus on providing customers with good facilities, and it was the first department store chain to issue their own credit card. Almacenes Paris branched out into Spain to offer tourism and travel services to Chileans. It also established an online store and by 2002 started making one third of the sales online.

Santiago is crowded with department stores since half the Chilean population is based in this metropolis. This prompts companies to look at different services to spur their growth further. Almacenes Paris achieved this objective by offering insurance to its clients by collaborating with the famous insurance company based in the US or Marsh & McLennan Cos., Inc. this was a beautiful combination of the experience of the US-based insurance company used to service the huge database of Almacenes Paris customers.

More than 10 million Chileans had credit cards from one of these department stores and Almacenes Paris had extended credit to the amount of 21% of all consumer credit in Chile and 2% of the GDP by early 1998!

By 1998 Almacenes Paris went on to buy the Chilean assets of J. C. Penney Company because the company did not take into account the tastes of the locals and just transferred American merchandise into Chile and suffered great losses.

By the early 21st century Almacenes Paris was still retaining its position as the second largest chain of department stores in Chile with over 10,000 employees scattered over the 14 stores in the country. The centennial anniversary was celebrated with the launch of a $17 million corporate headquarters called Torre Paris in Santiago’s classy Providencia business district.