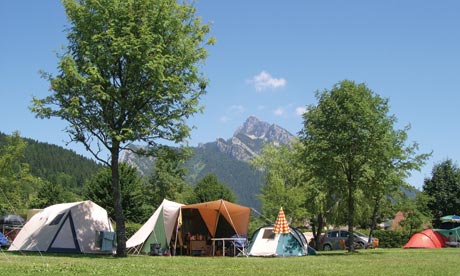 Do you want to go on a camping holiday to France? Are you looking for a camping ground in France? Here we’ve provided useful information & facts about camping in France.

Camping in France, either in tents or with caravans, is a hugely popular activity both with French people and foreigners from neighbouring European countries. France is home to thousands of camping grounds scattered all over the country which means wherever you happened to be in France you’ll never be too far away from a camping ground. Even if there is not camping ground nearby, many hostels in France allow you to pitch tents in the back garden. Many camping grounds in France are located near rivers, lakes and even the ocean making for scenic surroundings. However, camping grounds are rarely near any sites of touristy or historic importance which means it’s definitely an advantage if you have your own transport to get to and from the camping site in France.

If you arrive at a busy camping ground in the summer late in the day, you may find there is no room to accommodate you. However, if you make a point of going on foot you’re far less likely to be turned away and the staff will try to find somewhere to accommodate you.

Unauthorized camping, known as camping sauvage in French, is illegal and could get you in trouble. However, many people still do it. Provided you only set up camp for one night, take down the tent in the day, don’t make much noise and don’t light a camp fire,  you’ll probably get away with unauthorized camping in France.