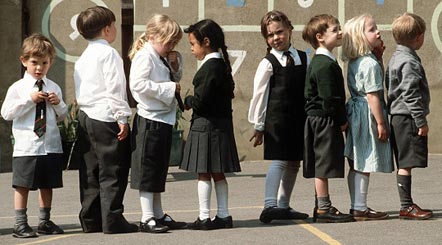 Schools in France have four major holidays each year. During these school holidays millions of French families take short holidays within France. This means that often during school holidays in France popular tourist resorts in France become very crowded and hotel prices go up. In some particularly popular places in France there may even be a shortage in hotel accommodation.

Perhaps the best time to visit France while avoiding school holidays is in the spring season from May onwards as this is when the weather is best. Autumn is also a good time to visit France; however, towards the end of autumn it becomes too cold to go sunbathing and days start to get shorter.

School Holidays in France at Christmas

All schools in France are closed from December 20th until January 4th because of the Christmas holidays. The winter resorts in the mountains including many of France’s ski resort in the Alps become particularly crowded over these two weeks.

School Holidays in France during February

Schools in France have another set of holidays that begin from February 11th and last for a month. However, children only get 15 days off. The system in France is such that the country is divided into three zones with each zone having an overlapping 15 day holiday.

School Holidays in France During Easter

The Easter holidays in France are also a month long, again with each zone in France having a 15 day holiday that overlaps with the others. The first day of this holiday begins a couple of days before Easter.

School Holidays in France during the Summer

During the summer months from the end of June until the beginning of September all schools in France are closed. The mountains and coastal areas can become particularly crowded during this period with many French families taking their holidays.

All employees in France are by law entitled to a five week holiday that can be taken at any time of the year. The majority of people in France, however, choose to take their holidays in the summer from the middle of July until September. This is especially so for working people with families as children are also off school.  The consequence of this is not only that the popular holiday areas become crowded, but the cities are often drained of their workers with many shops, restaurants and cinemas under staffed or even closed.