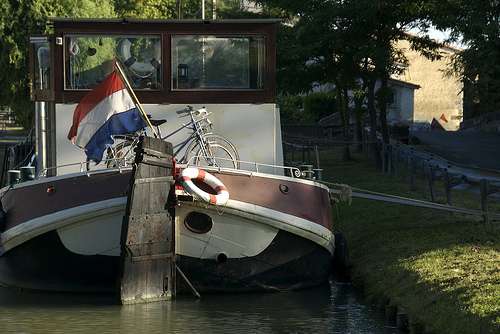 Do you want to go canal boating in France? Are you looking to rent a canal boat in France? From renting to driving, here we’ve included useful facts & information about canal boats in France.

Renting a canal boat and exploring the French countryside is one of the best ways to see France.  The leisurely pace at which canal boats in France proceed means you’ll be more relaxed and have more time to soak up the authentic French atmosphere. France has an extensive canal system, most of which is lined by trees amidst some of the most beautiful countryside in Europe.

The canal systems in France have a multitude of locks to deal with altitude changes as you move more inland in France. Passing through a lock can be quite a pleasant experience as it enables you to get off the canal boat and meet the lock keeper. Although it’s not necessary, helping out with opening the lock gate will be appreciated. Passing through a lock is free although some people with canal boats in France do leave a tip. Many lock keepers have small stalls set up where you can buy local produce such as cheese and fruits.

Canal boats in France can accommodate anywhere between 4-12 people. A typical canal boat in France will have sleeping bunks, toilet and shower, bedding, fridge, cooking facilities and cutlery.  All in all canal boats are quite comfortable, and provided you don’t mind the limited space there’s no reason why you cant live on a canal boat for a long period of time.

Anyone over the age of 18 can pilot a canal boat in France without the need for a special license. Even if you’ve never done it before, piloting a canal boat is easy. First time renters of canal boats will be given instructions on how to pilot and moor the canal boat when they pick it up from the canal boat rental agency in France. All of this takes less than one hour.

The speed limit for canal boats in France is 6km per hour on canals and 10 km per hour on rivers. Canals in France are usually quite wide so there’s no need to worry about getting caught in a tight spot. This also means you’re free to moor your canal boat in France almost anywhere you want.