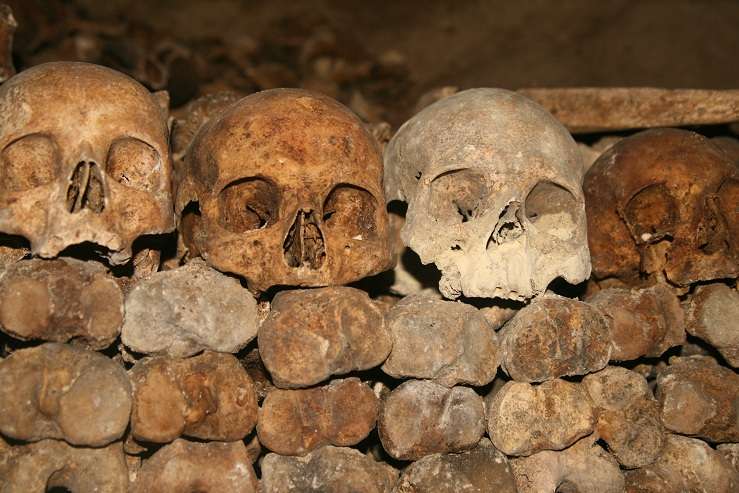 Want to learn more about the Catacombs of Paris? Read our guide for facts and info on these historical underground graves in Paris…

The Catacombs of Paris are also known as the Catacombes de Paris in French. This is the renowned underground ossuary in Paris. Surprisingly, it is located under the city, and the entrance is from the Denfert – Rochereau train station of the Paris Metro.

The caverns were a minor tourist attraction in the 18th century, but since they were opened to the general public in 1867 they have become quite popular with tourists. These Catacombs of Paris are a network of subterranean tunnels and caverns.

The official name for the catacombs is l’Ossuaire Municipal. A portion of the former mines in Paris is covered by this cemetery, near the Left Bank’s Place Denfert-Rochereau.

As the population of Paris grew in the 17th century the number of dead in the city began to overwhelm everyone. Initially all the larger churches had their own cemeteries, but the growth of the city and its dead were no match for this space.

Unfortunately, the graveyards were so overpopulated their surrounding areas were suffering from disease brought on by contamination from the corpses. This problem was not helped by the fact that there were many mass graves lying open in the city. After a century of ineffective administration in handling the burials the city municipality finally decided to relocate all of the graves from the main city in to the renovated section of Paris’s abandoned quarries.

This idea of using the nonfunctional quarries for transferring the bones, was initiated by Police Lieutenant General Alexandre Lenoir, but was executed by his successor M. Thiroux de Crosne, in 1786 and was overseen by Charles Axel Guillaumot, Inspector General of Quarries, and later on managed by Louis-Étienne Héricart de Thury.

One of the first bodies to be relocated to the new burial ground was that of Saint-Nicolas-des-Champs, and in 1788 the body of the dead due to the riots in the Hotel de Brienne, Place de Greve and Rue Meslee were added to the Catacombs of Paris.

Unfortunately, the Catacombs of Paris have successively seen an increase in involuntary bone piles. The exterior was covered in graffiti from the 18th century onwards. The knowledge of the time was utilized by Victor Hugo in Les Miserables, and in the year 1871 communards killed a group of monarchists in one of the chambers of the Catacombs of Paris. In World War II Parisian members of the French resistance used the tunnel system followed by German soldiers establishing underground bunkers under the high school of Lycee Montaigne, under the sixth arrondissement.

Unfortunately these underground tunnels of the Catacombs of Paris have always posed a challenge during construction. This is mainly because they cave in and damage buildings. Due to this reason certain rules were enforced in 1777, which prohibited the digging of new quarries and enforced laws to monitor the current ones.