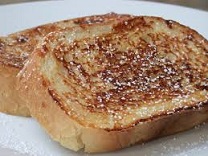 Want to learn more about cinnamon French toast? Read our guide for info and techniques on how to make this delicious French toast…

Cinnamon French toast is a delightful variation of the basic French toast. The most interesting fact about French toast is that if you ever travel to France you will not be able to find it listed on the menu. The reason for this is that French toast is known as pain perdu in France which is essentially translated into stale bread!

This food item is popular at breakfast tables in different countries across the globe. From North America to Southeast Asia a variety of ingredients are added and substituted in this dish however the basics of egg, milk and bread remain constant with variations like cinnamon French toast.

The history behind French toast is that it was perhaps created by folks from medieval Europe to utilize all sorts of ingredients to feed their family. Thus, they would refresh stale bread with milk and eggs and cook it on a hot skillet with a little butter or oil.

Some recipes for French toast can also be traced to ancient Rome! Culinary evidence reveals that plain or cinnamon French toast is not simply a food for the poor, it was made of the most expensive kind of white bread with the crust removed essentially wasting food.

Often many expensive spices along with almond milk were used to create special flavored almond or cinnamon French toast. These recipes are available in cook books which in medieval times were written only for the rich and the poor who could read!

There are a myriad of names used to describe or identify French toast. From soupys yn dorye from England to the French preferring the name tostees dorees, there were many names for the common French toast. Other English sources often name it payn purdeu which is similar to the name used in France today.

One of the most exotic recipes for French toast by the Maestro Martino incorporates the use of rosewater to flavor the French toast.
Others state that only clarified butter should be used to fry the toast and the bread should be soaked after the egg yolks have been strained to remove any lumps. If we take such pains to create the French toast we would taste the most luxurious and smooth piece of toast in the world.

In order to make this recipe you will need 2 eggs, 1/4 cup milk, 1/4 tablespoon vanilla extract, 1/4 tablespoon ground cinnamon, about 8 slices of French bread, sliced diagonally and some butter to fry.

In a chilled glass bowl, beat the eggs gently till frothy and add in the vanilla extract, milk and cinnamon powder.
Heat a skillet or griddle and melt butter on it to grease it lightly.
Dip the sliced French bread into the mixture and drain the excess. Place on a hot skillet and cook the slices, turning, till golden brown on each side. It will take approximately 2 minutes per side. Keep covered and warm till serving.
Sprinkle with a dash of cinnamon sugar and serve warm with maple syrup.