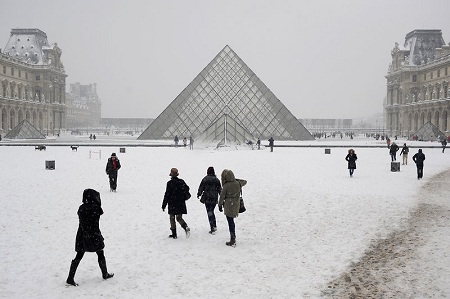 Are you going on vacation to France? Would you like to know what the climate is like in the part of France you’re visiting? Our guide to climate in France gives you useful information on climate in all regions of France.

Approximately 20% of the population of France lives in Paris and its surrounding metropolitan areas. This part of France, which is known as the Paris Basin, is located exactly half way between Brittany in the north west of France and Alsace in the north east of France.  The climate in the Paris Basin is generally mild with a year round average temperature of 12 degrees. Summers in Paris can be hot reaching into the mid 30’s. The Paris Basin has the driest climate in France with the lowest annual rainfall levels; however, rain patterns are hard to predict and it’s possible to get caught in a sudden rainstorm at any time of year.

The climate in North West France is a temperate one, although the weather conditions are greatly affected by the Atlantic Ocean. Not only does the Atlantic keep the temperature down in Brittany by a degree or so, but this entire region of France is often subjected to heavy westerly winds blowing in from the Atlantic.  Winters. However, are generally fairly mild rarely falling below freezing point. The Brittany area of France receives about 200 days of rainfall annually and the weather here can be quite humid.

Climate in the South of France

The South of France is synonymous with sun, sea and sand for good reason. Right along the southern coast of France as far inland as the Southern Alps, this region of France has a Mediterranean climate. Summers are long, hot and generally dry, while winters are mild with frost and snow almost unheard of. In general, winter temperatures tend not to drop below 5 degrees. Spring is wettest season in the south of France with Autumn fairly similar. During the summer months there is almost no rain at all.