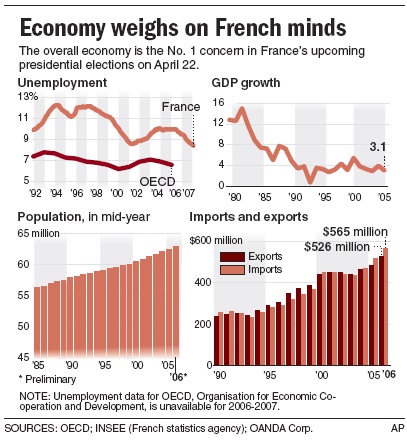 Are you going on vacation to France? Perhaps you’re looking for a job in France and would like to know about France’s economy. Here we’ve included useful information about the economy of France.

The economy in France tends to grow at roughly the average rate for an industrialized western European country which is just under 3%. Economic growth rates in France have been steady for decades due to conservative planning of the economy which in comparison to other western European countries is more centralized by the government in France. In fact, one of the peculiar characteristics of the French economy for many visitors from America and other European countries is the level of state control of many economic sectors which have long ago been privatized in other countries.

Unemployment and Economy in France

France has a relatively high unemployment rate for a western European country currently running at betwwn12-15% according to different sources.  A large percentage of the unemployed population of France comes from ethnic minorities including North Africans and Sub Saharan Africans. This high level of unemployment among young ethnic men, most of whom live in the suburbs of France’s major cities, has led to increasing tensions between minority communities and the general population in recent years.

France is one of the most highly industrialized countries in the world with high levels of technological capabilities. Approximately 40% of the workforce is employed in the industrial sector while about half of the GNP comes from the same sector.

Despite France’s highly industrialized economy and world renowned universities, France has comparatively fewer large multinational corporations than other countries of similar size and resources. This has often been blamed on poor coordination between the education and industrial sectors so many of the scientific findings from the research institutions and universities are never applied by the big companies with the resources to produce new products on an economically viable basis.