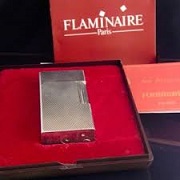 Amongst the many things that the country of France is famous for are flaminaire lighters. These are special lighters that have a collector’s value and are fully functional as well. Over the years many different variations of flaminaire lighters have been made in France. Today enthusiasts can pick up their flaiminaire lighter of choice from souvenir shops across the country as well as through auctions on the Internet.

Some of the interesting French flaminaire lighters available in the market today are given below:

This unique set consists of a well carved pipe along with an old school flaminaire lighter in a cigarette holder. This collection was maintained back in 1930. Although the set is titled as the old smokers set, it is most often sought after by collectors who are not necessarily smokers. Today you can get your hands on this unique set for about €75.

This is yet another extra special flaminaire set that has been made in solid Gold. The set consists of a very beautiful solid gold and silver match compound gas lighter. The lighter also has gold hallmarks that add to its value. One of the things that sets this French lighter apart is the fact that it has an exchangeable gas tank. You will be able to purchase this gold flaminaire set for €85.

The name says it all for this flaminaire by itself. Although you will not be able to replace the gas tank for this lighter you may be able to refill the gas using the correct tools. The lighter has been constructed with superb mechanism and unlike the conventional French lighters this one has a plastic body. This super lighter was maintained back in 1965.

This special French lighter actually displays an advertisement for a company known as Sofca. This was a veterinary lab situated in Paris. The lighter was probably used as a promotional product for the lab. It has been modeled around US Ritepoint lighter but is far more sophisticated in terms of its mechanism and appearance. One of the things that sets this petrol lighter apart is the fact that it can be disassembled. The Zico 421 was developed in 1950 and is available for €78 in the market.

If you want to go with something out of the box then this should be the lighter of choice for a serious collector. This is a black rat control lift arm lighter featuring the double thumb wheel design. It works with petrol and is very effective even against the wind. The unique design coupled by the black mapping sets this French flamanaire lighter apart. It belongs to the year 1938 and can be purchased for €45 in the market. Although it is not as expensive as some of the other flaminaire lighters in France it is still one of the rarer varieties which makes it a collector’s prized possession.