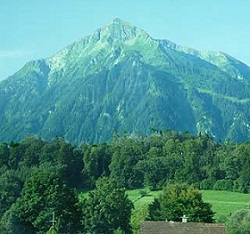 Interested in the landscape of France? Want to know about the different landforms in the region? Want to know what activities the unique French landforms offer? Read our guide for more facts and information…

In Europe most countries are small in area thus limiting the different landforms within their borders; France, however, as the second largest country in Europe is different. The landscape of France is diverse and allows residents and tourists alike to enjoy not only the unique landforms but also the different activities and climates that they offer.

When traveling across the French landscape travels experience the ups and downs of mountains and canyons. There are three unique mountain chains that lay in France’s boundaries. The three mountainous landforms lie in the east, as well as in southern as south central France.  Part of the famous Alps lie in the southeast along France’s border with Italy. The highest landform in France is also found in the Alps at Mount Blanc which is 15 770 ft, which is also the second highest peak in Europe. The other two major chains are the Jura Mountains which are made of limestone and the Pyrenees which rest along the France-Spain border.  These mountain ranges offer travelers and residents alike a great opportunity to explore the activities of skiing and hiking.

To accompany all of the mountainous peaks in France, there are also many canyons and valleys in the country. Massif Central is a region in France that is volcanic in origin. It is a mountainous plateau, along the southern Mediterranean coast, which features many valleys and canyons. France is also home to the landform known as Gorges du Verdon. Gorges du Verdon is in the southeast part of France and is a massive canyon that in parts is 700 feet deep and runs 11 miles long.

The landforms in France are not all peaks and valleys as France is also home to rolling plains. In the north, central and west of France much of the countryside is covered by a flat plain that is interspersed with rolling hills. The rolling hills are also spotted with lush marshland. The rolling plains that cover much of the country are also fertile allowing the French to raise a variety of crops.

France is a coastal country and as such features unique landforms on the coasts. The French coast across from England the landscape is sharp with cliffs. In contrast, along the Atlantic coast near Spain the coast is covered with beautiful white sandy beaches. France also features another distinct landform on the Mediterranean coast as there are pebbled beaches. Off of the coastlines French territory also extends to many islands including Corsica which is the largest.  The landforms of France allow visitors and native residents to enjoy various activities and climates all within the boundaries of one country.